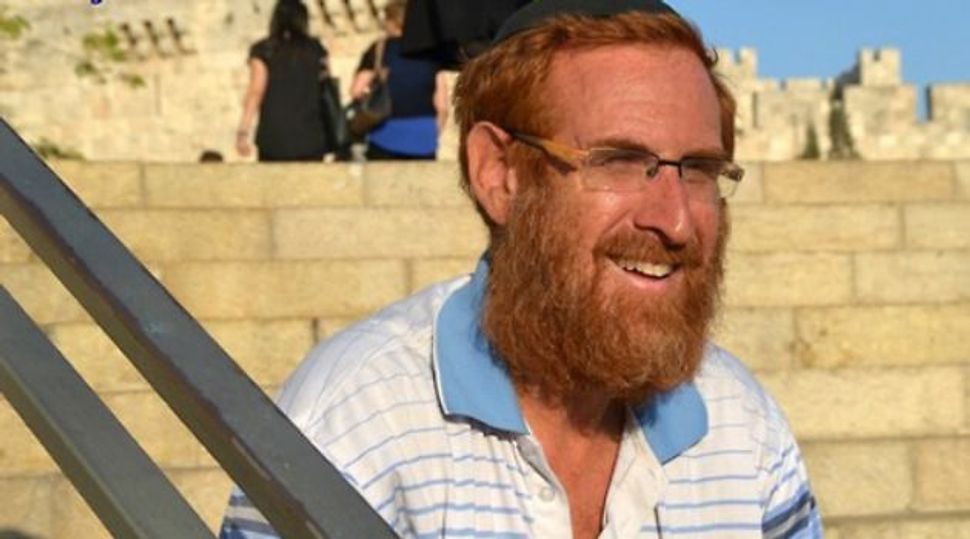 “He is a man of peace and a huge supporter of religious dialogue,” he told JTA on Tuesday, one week after his brother Yehuda was shot in the chest and stomach outside Jerusalem’s Menachem Begin Center by an assailant who fled on a motorcycle.

The alleged assailant, who worked in the kitchen at the center and who served 10 years in an Israeli prison for involvement in terrorist activities as a member of Islamic Jihad, was killed in a shootout with Israel Police at his home in eastern Jerusalem.

More than a week after the shooting, Yehuda Glick, 48, is showing signs of improvement. Shaare Zedek Medical Center on Thursday released a statement saying that Glick “was partially communicating with his environment and recognizes those around him.” He was also being weaned off of a respirator.

The Temple Mount activist used to laugh at those who labeled him an extremist and call it “ridiculous,” his brother said.

He “firmly believes Jews should have the right to pray on their holiest site,” the Temple Mount, said his brother, adding that he thinks there can be “prayer alongside and prayer along with Muslims.”

Since 2006, the New York-born activist has worked for The Temple Institute, which is dedicated to educating about the Holy Temple in Jerusalem and which has created vessels and priestly garments in accordance with descriptions in the Bible.

“I always keep my mobile phone on, in case I get the message that permission has been granted to build the Temple and I have to run,” Yehuda Glick said wryly when his cellphone rang at the beginning of his speech Oct. 29, the night of the assassination attempt, at a conference on the Jewish right to pray on the Temple Mount.

In addition to having rabbinical ordination, Yehuda Glick is a licensed tour guide, specializing in the Old City of Jerusalem, in particular the Western Wall, Temple Mount and surrounding areas.

Glick’s goal, his 54-year-old brother said, is to encourage observant Jews to visit the Temple Mount. The majority of Orthodox rabbis believe this is forbidden, following a 1967 chief rabbinate ruling that bars them out of concern they will accidentally walk on sacred parts of the Temple.

But Glick has attempted to address these concerns by meeting with archeologists to learn which areas of the Temple Mount are non-sacred and then urging rabbis to make rulings permitting visits there. He has brought thousands of Orthodox Jews to the Temple Mount in the past 15 years. Nonetheless, in December 2013, the two chief rabbis of Israel, David Lau and Yitzhak Yosef, reiterated the ban on Jews entering the Temple Mount.

Meanwhile, the Muslim Wakf, which manages the Temple Mount, bars Jews from praying at or bringing ritual objects to the site. After the Israel Police, who enforce the Wakf’s prohibition, stopped Glick from saying prayers the two sides fought it out in Israel’s Supreme Court, which ruled about three years ago that it is legal for Jews to pray at the Temple Mount, but that the police can prevent the prayer if they believe it will endanger the public.

“Glick is an exceptional right-wing activist, who also befriends secular Jews and left-wingers,” columnist Roy (Chicky) Arad wrote in Haaretz days after the shooting. “In contrast to (right-wing lawmaker Moshe) Feiglin, who insists that visits to the Temple Mount should not be regarded as part of the discourse on human rights but rather as an issue of Israeli sovereignty, Glick views the matter as a question of freedom of worship for members of all religions, so he manages to reach a broader audience.”

Glick believes the Temple Mount could function the same way that the Tomb of the Patriarchs in Hebron does, with separate areas for Jewish and Muslim worship and where access to the whole site is provided to Jews or Muslims on certain holidays.

Yitzhak Glick, who travels once a month to work at a hospital in Cleveland, is the founder of the Efrat Emergency Medical Center – which treats both Jewish and Palestinian patients from the Gush Etzion area. He also volunteers as the center’s medical director and visits nearby Palestinian villages to provide free medical care to its residents.

A representative of the United States’ diplomatic corps spoke with the family on Tuesday, a week after the shooting. The call came hours after a report circulated on Facebook, and later in the Israeli media, that no representative of the U.S. government had contacted the family. Yehuda Glick, the father of eight, is a resident of the West Bank settlement of Otniel, located south of Hebron, where he oversees the foreign student program at the Otniel yeshiva.

“Yehuda was always a doer,” Yitzhak Glick said. “He always felt he had to do something meaningful for someone.”