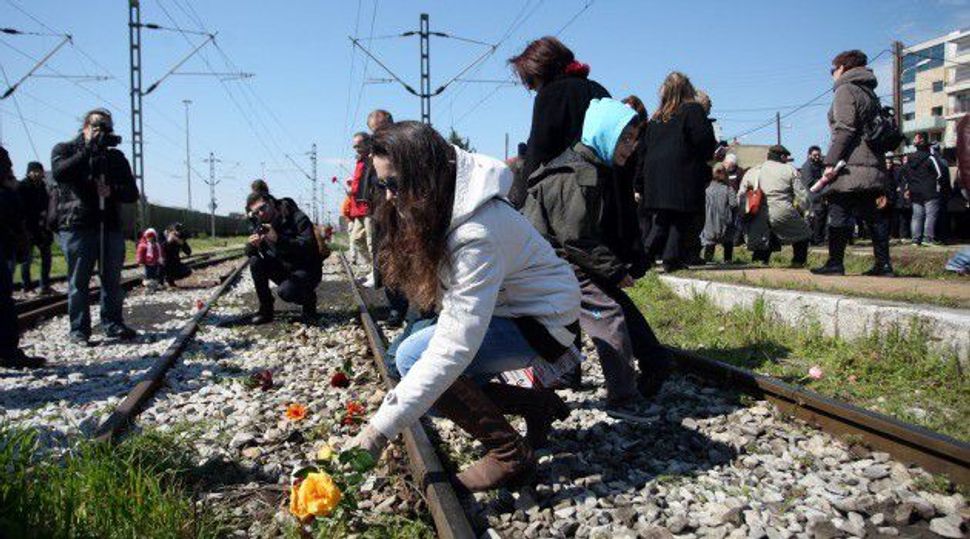 Aristotle University of Thessaloniki, partly built on the ruins of the city’s historic Jewish cemetery, unveiled a memorial to the graveyard that was destroyed by the Nazis.

Greek Jewish leaders hailed the erection of the monument, a series of grave stones in a bed of green grass next to a broken menorah, as a late, but significant move by the university and the city to recognize the past.

The monument is an important step in reversing attempts to erase the city’s Jewish past, said David Saltiel, president of the Thessaloniki Jewish Community, but he called for more work to be done to “investigate, document and present clearly to the public the instigators and executors of this destruction.”

The Jewish community of Thessaloniki was a vital center of Sephardic Jewry for 450 years following the expulsion from Spain. Known as the “Flower of the Balkans,” it was the center of Ladino culture in the region.

In March 1943, the Nazis began sending Jews in railway convoys to the Auschwitz-Birkenau death camp. By August, 49,000 of the city’s prewar population of 55,000 Jews had been deported. Fewer than 2,000 survived.

During the Nazi occupation, the Germans destroyed the cemetery, using the grave markers for construction material. The ceremony also was attended by Greek political leaders; the mayor of Thessaloniki Yiannis Boutaris, who has been instrumental in reviving the city’s Jewish heritage; and the newly appointed Ambassador of Israel to Greece Irit Ben-Abba.

University Rector Pericles Mitkas condemned the destruction of the cemetery, but said that perhaps some consolation could be found in the fact that on “these sacred lands a university was built, that is, the daily meeting place of many cultures, promoting freedom and tolerance of all religion, race and politics and dedicated to combating prejudices. “