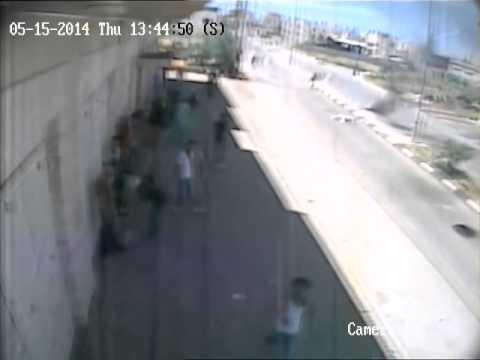 Israeli police have arrested a paramilitary border policeman over the fatal shooting of a Palestinian teenager in the occupied West Bank in May, a spokesman said on Wednesday.

Nadim Nuwara, 17, and Muhammad Abu Thahr, 16, were killed during a May 15 demonstration in which Palestinians hurled stones at Israeli forces. Video from security cameras suggested they were shot despite posing no immediate threat to the troops.

Police spokesman Micky Rosenfeld said the policeman was arrested in connection with Nuwara’s death, but not Abu Thahr’s, because an autopsy was only carried out on Nuwara’s body.

All other details of the investigation were under a gag order, he said.

At a remand hearing in a Jerusalem court on Wednesday, Benny Katz, the suspect’s attorney, told reporters his client says he fired only rubber bullets during the protest and denies using live ammunition.

At the time, Palestinian medics said the boys were killed by live bullets. The Israeli military said its forces fired only rubber bullets that day and that border policemen, who are also armed with assault rifles and carry out security duties in the West Bank, were present at the scene as well.

Violence between Israelis and Palestinians has spiraled in the last few weeks, raising fears of a new uprising. Peace talks collapsed in April and Israeli forces and Palestinian militants fought a 50-day war in July and August.

In June, the Palestinian attorney-general said an autopsy, requested by Nuwara’s family, showed the youth was killed by live fire. U.S., Danish and Israeli pathologists were also present at the autopsy.

Footage from security cameras on Palestinian properties near the demonstration showed each of the youths, about an hour apart according to the time stamp, walking at some distance from the protest and then falling to the ground, apparently shot.

“Hopefully God willing there will be justice in the case of my son,” said Siam Nuwara, the boy’s father. “I believe there is law in Israel, but the question is whether they will apply it for a Palestinian the same way they would for an Israeli.”

The protest took place outside Israel’s Ofer Prison near the Palestinian town of Beitunia.

In an incident in Beitunia on Wednesday, Israeli troops shot and seriously wounded Ahmed Hassouneh, a 25-year-old Palestinian, during an arrest raid, medics said. Israeli authorities had no immediate comment.