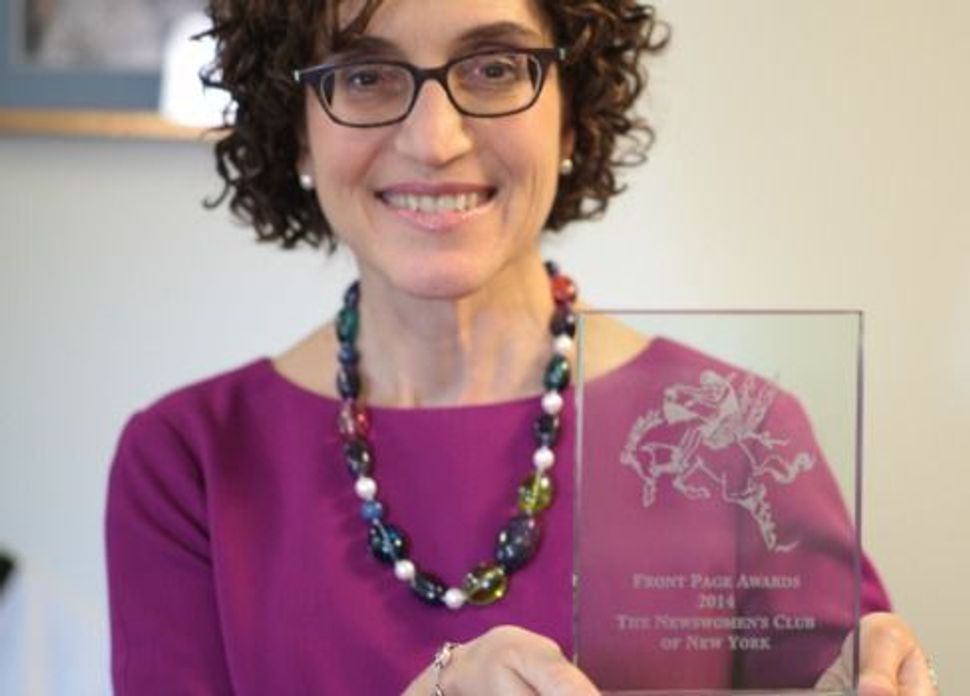 Forward Editor-in-Chief Jane Eisner was cited for editorial writing by the Newswomen’s Club of New York. Image by martyna starosta

Forward editor-in-chief Jane Eisner has won a Front Page Award for editorial writing from the Newswomen’s Club of New York.

Eisner won the award for editorials on conversion to Judaism and the controversy around Israeli company SodaStream.

In accepting her award, Eisner thanked the Newswomen’s Club for recognizing the work of the Forward and the important role that Jewish media has played in American journalism for centuries. She also thanked the organization for highlighting editorials and commentary written by women.

At a time when women still are underrepresented on op-ed pages, Eisner said, it’s “gratifying to see our work recognized this way.”

The Front Page Awards, established in 1938 by The Newswomen’s Club of New York, promote exceptional work by women in the news business and support the highest standards of journalism.

It’s the second straight year the Forward has scooped an award from the club. Naomi Zeveloff won last year for her profile of the family of Noah Pozner, the Jewish boy slain in the Newtown school rampage.

The award was handed out at a black-tie dinner held at the Downtown Club in Manhattan.

Among other honorees were Tammy Kim of Al Jazeera America, who was named best new journalist and Julia Angwin of ProPublica received the Front Page Award for Newswoman of the Year for her coverage of the National Security Agency.

The Newswomen’s Club of New York was established in 1922 and is the only professional organization in the New York area dedicated to supporting women journalists.