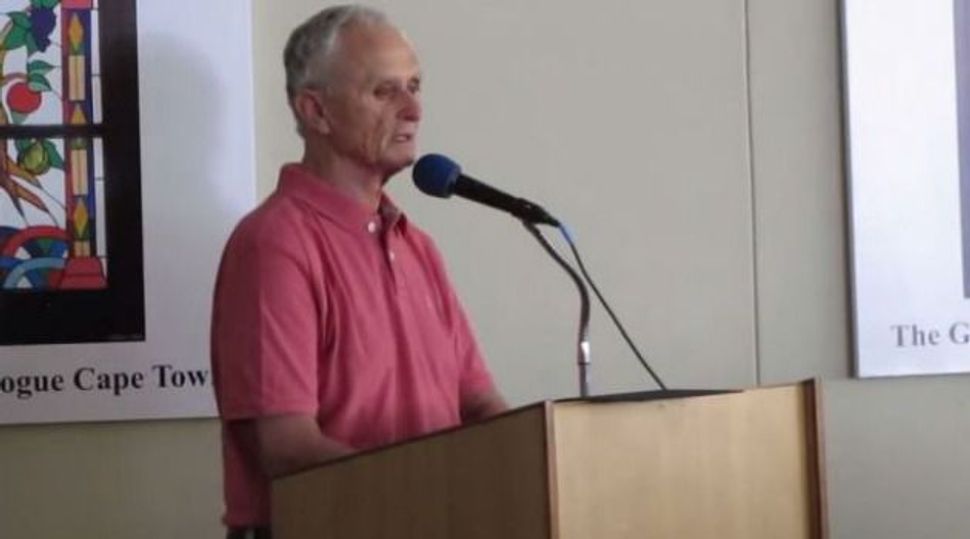 Mervyn Smith addresses the ZJC reunion in Cape Town in 2013. Image by YouTube

Mervyn Smith, president of the South African Jewish Congress and a major anti-apartheid activist in the Jewish community, has died.

Smith died Saturday after a long illness. He was 77.

“If there was a Jewish organization, I belonged to it – with my heart and soul,” Smith said frequently, according to the South African Jewish Congress.

At the Board of Deputies’ national conference in 1985, Smith was the prime protagonist in the passing of the historic resolution condemning apartheid.

Rabbi Moshe Silberhaft, CEO of the African Jewish Congress, said in a statement that the South African Jewish community “has suffered a grievous loss.”

“Mervyn, an attorney by profession, was a leader of stature, not only in many spheres of Jewish communal life but also as a respected representative of the community in South African national affairs,” Silberhaft wrote. “His presence, his wisdom and his experience will be sorely missed not only by his family, but by all his friends and colleagues.”

Smith, a practicing attorney, received the Lexus Lifetime Achiever Award at the Jewish Achiever Awards ceremony for his contributions to reconciliation, change and empowerment in South Africa in the fields of business and/or art, science, sport or philanthropy.

He was an expert on anti-Semitism and advised the board on legal matters, particularly regarding anti-Semitism. Active in Holocaust studies, Smith served as board chairman of the South African Holocaust Foundation.

A cricket player for 25 years, he was life president of the Bellville Cricket Club.