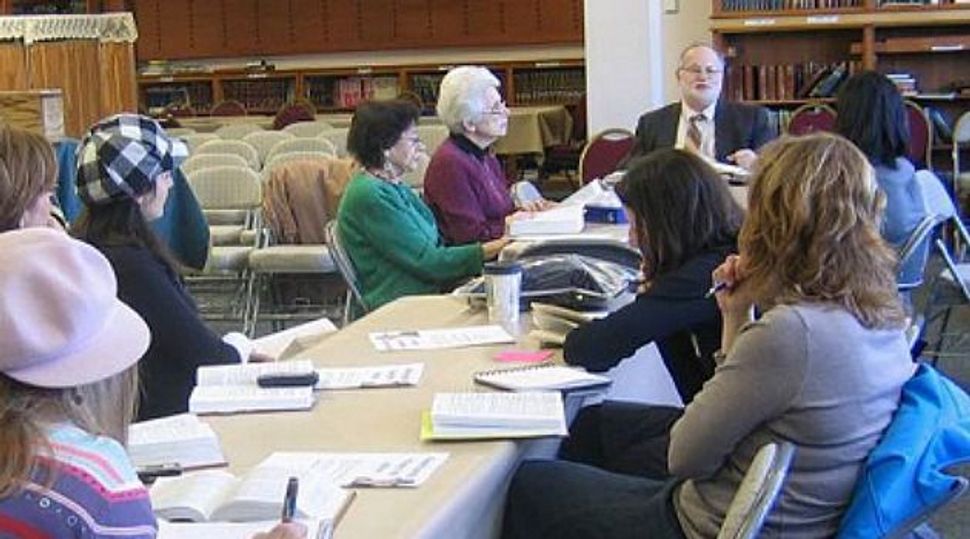 (JTA) — The rabbi of a major modern Orthodox synagogue in New Jersey has written a blog post that calls for Israel to collectively punish Arab Israelis and Palestinians until they realize “they have no future in the land of Israel.”

In the post, written Friday and titled “Dealing with Savages,” Rabbi Steven Pruzansky of Congregation Bnai Yeshurun in Teaneck offers suggestions that range from destroying whole Palestinian towns to uprooting the Dome of the Rock.

The post has since been deleted, but it’s cached here.

Pruzansky refers to “the Arab-Muslim animals that span the globe chopping, hacking and merrily decapitating,” and then writes, “At a certain point, the unrestrained behavior of unruly animals becomes the fault of the zookeeper, not the animals.”

So what should Israel do? According to Pruzansky, essentially end civil and human rights for many Arab Israelis and Palestinians. Beyond killing all terrorists and demolishing their extended families’ homes, Pruzansky says Israel should destroy entire Arab villages if more than one terrorist comes from them. All the residents of those villages, he writes, should be expelled.

He also writes that rioters and stone-throwers should be shot with live ammunition, and that reporters should be barred from these scenes and have their cameras confiscated.

Pruzansky says Arabs should be barred from the Temple Mount for at least six months, and muses that “perhaps the day will come in the near future when the mosque and the dome can be uplifted intact and reset in Saudi Arabia, Syria or wherever it is wanted.”

Pruzansky writes that Palestinians and Arab Israelis as a whole are Israel’s enemy — “and that enemy rides our buses, shops in our malls, drives on our roads and lives just two miles from us.” (“Us” apparently doesn’t include Pruzansky himself, who leads a congregation 5,000 miles from Jerusalem.)

This isn’t the first time Pruzansky has made the news for his views. Earlier this month, he compared The New York Jewish Week to Der Sturmer, a Nazi newspaper. Pruzansky’s congregation, Bnai Yeshurun, has about 800 member families, according to its website, and has been led by Pruzansky for more than 20 years.

Near the end of his post, Pruzansky wonders why Israelis haven’t come to the same conclusions he has. It’s an “enduring enigma,” he says.

Israelis across the political spectrum support safeguarding the state’s democratic character. Most have consistently backed a Palestinian state. But it bears noting that almost all of those who oppose Palestinian statehood still don’t speak anything close to Pruzansky’s language.

A telling example: Naftali Bennett, who leads the furthest-right party in Knesset and strongly opposes a Palestinian state, came out quickly and vehemently last week against an Israeli city’s ban on Arab construction workers. “Ninety-nine-point-nine percent” are nonviolent, he said, and Israel should not discriminate based on race or religion.