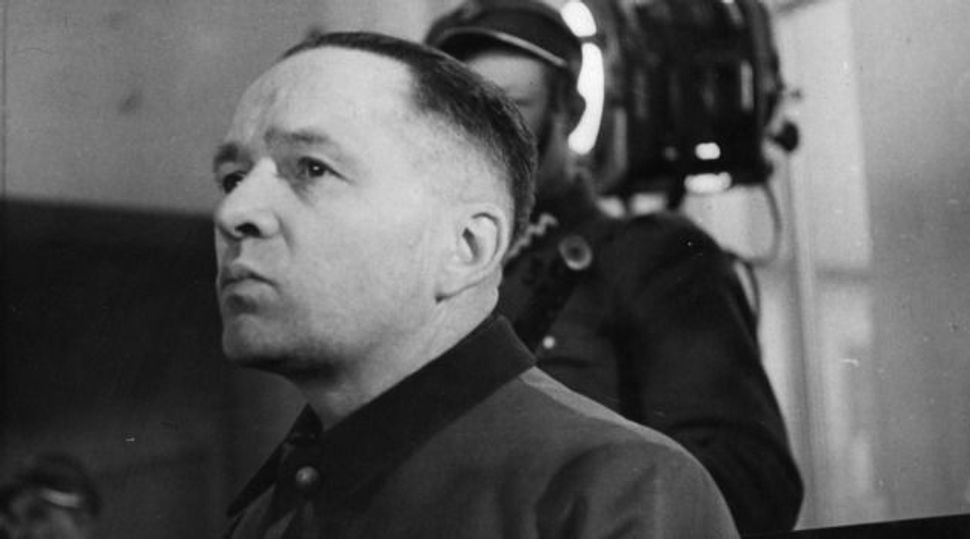 Rudolf Hoess during his trial in Poland, 1947. Image by Getty Images

Hungarian Holocaust survivors had a difficult time handling the presence of Rainer Hoess, the grandson of Auschwitz death camp commander Rudolf Hoess, at an event in Budapest.

Rainer Hoess was one of the guest speakers at the commemoration, which was one of the closing events of this year’s 70th anniversary of the start of the Holocaust in Hungary ceremonies organized by the March of the Living Foundation.

“The March of the Living Foundation in Hungary is doing a very important job by being very active against the rise of anti-Semitism and the rise of anti-Israel sentiment all over Europe,” Ilan Mor, Israel’s ambassador to Hungary, said in an opening speech at the ceremony.

The grandson of Rudolf Hoess was invited to the event by the March of the Living – Hungary Foundation.

Although it was emphasized by most speakers at the ceremony that “no descendent is to be blamed for the sins of his or her forefathers,” the atmosphere of the ceremony was chilly due to the presence of the descendent of the former chief Nazi, who was responsible for the extermination of roughly 400,000 Hungarian Jews in the Auschwitz death camp, in June 1944, at the end of the war.

Rainer Hoess spent four days in Budapest meeting face-to-face with Hungarian Holocaust survivors, and during his visit he also met with 200 students at a question and answer session organized in a Budapest high school.

A few survivors sitting in the audience at the March of the Living ceremony told JTA they were not satisfied with what Rainer Höess said in his five-minute speech. One survivor told JTA that: “It is not easy to live with such a name,” adding: “It would be great to see the descendants of Hungarian Nazis do the same and to face the sins of their Fathers.”