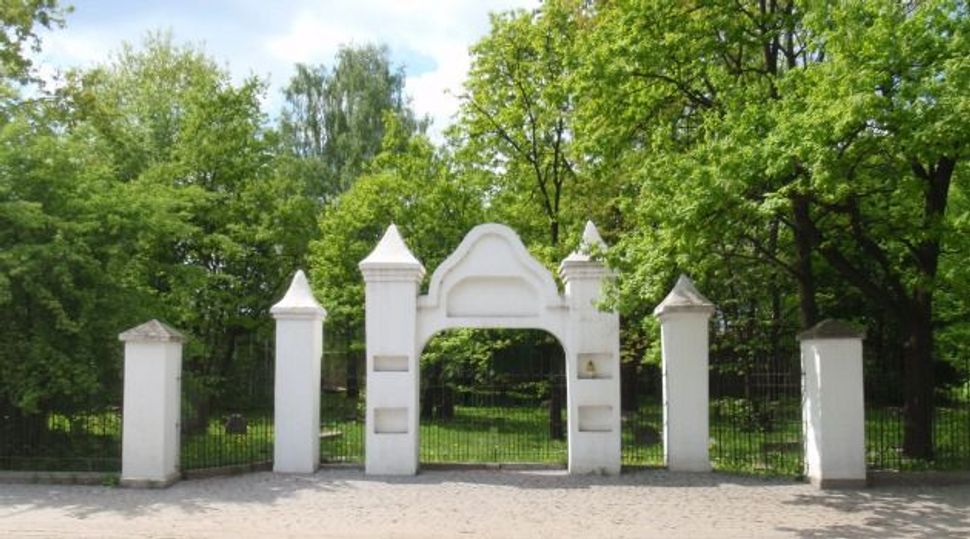 The Jewish cemetery in Grodzisk, Poland. Image by Wikimedia Commons

A town in central Poland has prepared a development plan that will turn a Jewish cemetery into a residential complex with underground parking.

The Jewish community of Warsaw and local activist Robert Augustyniak, who is not Jewish, have protested the plan.

The City Council in Grodzisk Mazowiecki held a public discussion on the plan on Monday. Following the meeting, Mayor Grzegorz Benedykcinski suspended action on the plan pending clarification of the cemetery’s boundaries.

The Jewish cemetery in Grodzisk was divided after World War II with a small section maintained as a cemetery and the remaining area acquired by Samopomoc Cooperative. Today, a private company that buys and sells scrap metal manages the site.

An historic cemetery gate with Hebrew inscriptions from the 19th century remains on the site.

Augustyniak offered his objections to the plan during the town hall discussion. “I showed the map of the area from 1927 and 1934,” he told JTA. “It clearly shows that the area of the cemetery was much larger than it is today. It seems that the council did not know about it. I hope that now they will change their plans.”

The Jewish community of Warsaw also has raised objections to the development plan. It will ask the city office in charge of historic sites to register the cemetery in its pre-war borders as a protected area.

“Taking into account the new facts disclosed during public discussion on Nov. 24, I made the decision to suspend the procedure, pending clarification of all doubts,” Benedykcinski, told JTA. “Thank you for your attention and I declare that I will make every effort to ensure that the new plan, which is a local law, pays attention to the history of the Jewish people residing in Grodzisk Mazowiecki.”

The mayor also asked the Jewish community in Warsaw for help in identifying historical and actual boundaries of the cemetery.

“The Jewish community in Poland is so small, that we are not able to monitor all matters relating to cemeteries, synagogues and other places important from the point of view of the pre-war communities,” Piotr Kadlcik, president of the Union of Jewish Communities in Poland, told JTA. “That is why we appreciate the initiative of people like Robert Augustyniak, who care about local history and the fact that it was not forgotten. I also thank the Mayor of Grodzisk for his quick response and willingness to cooperate in this regard.”