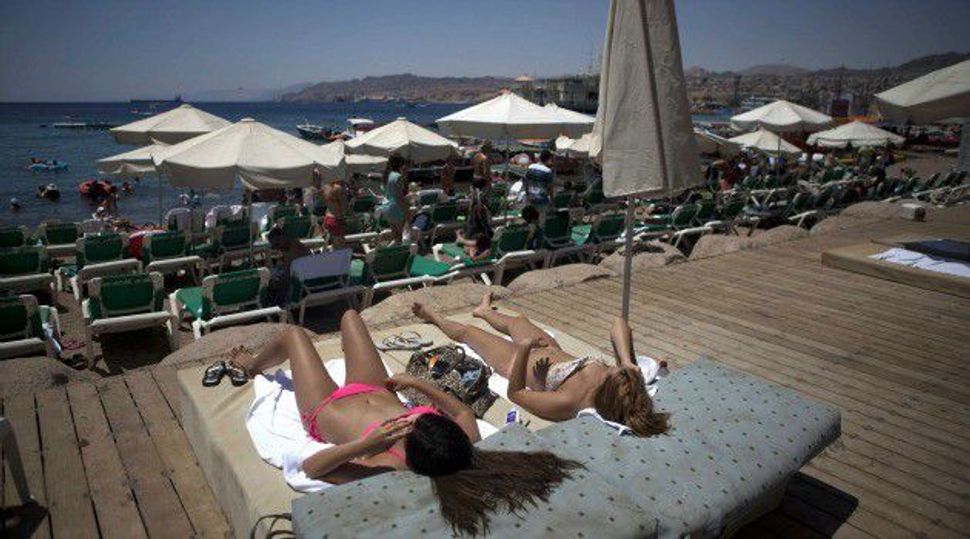 (JTA) — Eilat — located on Israel’s southern tip, hundreds of miles and a metaphorical world away from the busy streets of Tel Aviv and the tense political climate of Jerusalem — is known as a destination with swanky hotels, swimming, snorkeling and suntanning. But residents of the city say that behind the promenade, a faltering tourist economy and rising cost of living have made its atmosphere increasingly uncertain — and are driving some people to leave.

“There are many who make a lot, and there are the young people who make 4,000 [shekels, about $1,000] and pay 2,000 [shekels] in rent and become poor,” said Zili Grossman, executive director of Eilat Gives, an aid organization she founded in 2000.

She added, “Eilat is a special case because it looks like a sparkling city, but how much does a cashier at a hotel make?”

Nearly 8 percent of residents left Eilat in 2011, according to the Israeli news website Ynet, and the city saw a decline of 73 percent in direct foreign flights in October as compared to October 2013, according to the Israeli business publication The Marker. With an increasing number of low-cost flights available from Tel Aviv to Europe, Israelis are also choosing other vacation destinations.

Eilat is home to nearly 50,000 year-round residents. It was founded in 1950 as a outpost on the borders with Egypt and Jordan. It was declared a city in 1959, and at the time was populated mostly by fisherman and employees of the local port. Today the city looks like an average peripheral Israeli town with a tourist strip tacked on. It has the same faded stucco houses, the same red-pitched roofs, the same rundown housing projects, the same new developments lined with McMansions.

But living a five-hour drive from Tel Aviv and Jerusalem comes with its differences. Residents don’t pay sales tax as an incentive for living here. They rarely mention addresses when giving directions: Just ask around, they say, and someone will show you where to go.

“The isolation makes us feel like we’re in the same boat,” said Oren Zadok, the city’s sole X-ray technician and someone who has lived here nearly all his life. “If there’s a bar mitzvah or a wedding, there’s a thousand people there. The funerals are giant. Eilat is essentially a kibbutz.”

Indeed, there is a small-town mentality in which everyone seems to know each other by name. Grossman gets a free slice at the pizza place down the street from her office. She is friendly with the cab driver who picks her up at a busy intersection.

Residents worry, however, that young people won’t stay in the city. Four satellite college campuses have opened in the city, and socioeconomically, Eilat ranks above-average overall among Israeli towns. However, being so far away from Israel’s big cities means Eilat doesn’t offer the same educational and employment opportunities as Israel’s center.

“The fact that you can study here is wonderful,” said Eli Attias, 53, whose father moved to Eilat soon after it was founded. The question now is, you study, and when you get your degree, what will you do? Will there be work? That’s the challenge.”

In the meantime, signs of distress are visible in Eilat. A large, crumbling housing project nicknamed “Sing-Sing” towers over one of the main streets crowded with migrants from Eritrea and Sudan, as well as poor Israelis. The town center, only a few streets behind the strip, looks faded — wiry neon signs are the outstanding feature on an otherwise unremarkable traffic circle. Grossman says her hands are full with requests from the city’s poor.

“There’s economic difficulty, and because most of the city is built on tourism, if there aren’t enough tourists, the shops and restaurants are hurt,” said Nora Bitton, a social service worker in Eilat. “We didn’t get missiles [during the recent war], but we were hit hard.”

To address the economic woes, the Eilat municipality wants to make the city a commercial and industrial center as well as a tourist hotspot. A large international airport nearby that would offer more than the current small airfield is set to open next year. And plans are underway for a high-speed train from central Israel and an expanded port.

The mayor’s constituents say such projects are essential but are skeptical they will come to pass. Residents note that previous plans to lay train tracks to Eilat from Beersheba and Tel Aviv have failed for decades.

“We’re very doubtful,” Bitton said. “We’ve been talking about a train since Eilat was founded. But if you don’t build it, you don’t attract people.”

Eilat is far from the poorest of Israel’s municipalities, but some data point to its challenges. As of 2010, one-quarter of Eilat families have a single parent as the head of household, the highest percentage among cities with more than 5,000 families. And the average monthly salary per employee in the city in 2012 was the equivalent of $1,763 — 23 percent lower than the overall Israeli average.

“Conditions have been very hard in recent years,” said Toni Lis, a reporter for Yediot Eilat, a local newspaper. “The rise in cost of living didn’t pass over Eilat. More and more people are searching in garbage cans. People have to choose between medications and food.”

Still, Eilatis say, even with the distance from Israel’s center, the limited jobs and a growing sense of uneasiness, they remain committed to their city. Drawn in by the hot days and a warm community, the residents say what Eilat really needs is for the rest of Israel to see the city beyond the hotels.

“When I leave Eilat, I’m like a fish out of water,” said Alona Yosef, who runs the Eilat Gives soup kitchen. “I like the air here. There’s a lively atmosphere.