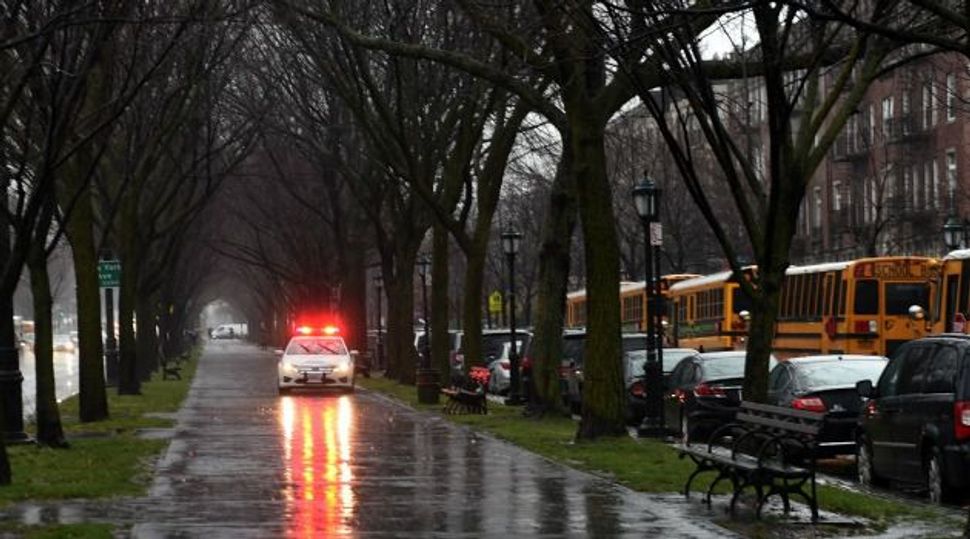 (Reuters) — New York police fatally shot a man armed with a knife on Tuesday after he stabbed a rabbinical student from Israel in a Brooklyn synagogue, and authorities quickly stepped up security at Jewish houses of worship around the city, police said.

The suspect, Calvin Peters, 49, who has a history of mental illness, stabbed and wounded 22-year-old Levi Rosenblat, who was studying at the world headquarters of the Chabad-Lubavitch movement in the Crown Heights neighborhood of Brooklyn, police said.

When police arrived at the synagogue at 1:40 a.m. EST (0640 GMT), they found the suspect with the knife in his hand and threatening other worshippers.

Police officers confronted Peters, and the suspect complied with their demand to drop the knife. A video of the confrontation shows the officer then holstered his gun, but Peters picked up the knife again and began moving toward police.

Police said the officer shot once, hitting Peters in the torso. He was taken to a hospital where he was pronounced dead.

While the assailant’s motive remains unknown, Police Commissioner William Bratton said security was being stepped up at Jewish facilities around the city.

Chabad-Lubavitch is a movement dedicated to encouraging Jews to be more observant, and the building is revered by some Jews as the seat of the grand rabbi, the late Rabbi Menachem Mendel Schneerson, who some followers believed was the messiah. The incident comes just weeks after a deadly meat cleaver attack by two Palestinians in a synagogue in Israel.

It also comes amid close scrutiny of U.S. law enforcement after several recent police killings of unarmed African-American men. Police described Peters as black and the officer who shot him as Hispanic.

Bratton said the NYPD is stepping up training for officers on ways to bring people under control without using firearms.

“The shooting looks like it was justified,” Bratton told reporters. “You had an individual with a knife who had stabbed an individual.”

The student, Rosenblat, was stabbed in the left temple and was in stable condition at the hospital, police said.

At the time of the incident, the building, which also houses a soup kitchen for the homeless and needy neighborhood residents, was open as usual and a number of people were inside.

In the video, the attacker walks up to and asks each of about a half dozen men dressed in Orthodox Jewish clothing, “Want me to kill you?”

The officer demands the attacker drop the knife or he will shoot and the men initially shout, “Don’t shoot! Don’t shoot!” Police confirmed the video, which was posted to the New York Post website, was legitimate.

The knife was recovered at the scene and the investigation into the incident is continuing.