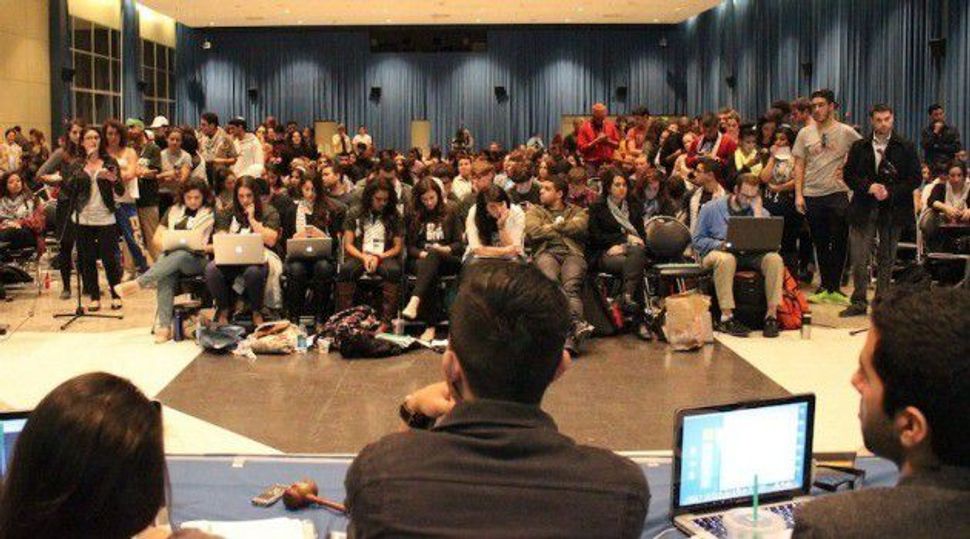 California Screaming: Students at UCLA debate Israel divestment move as the BDS fight continues to rage across the Golden State.

A union which represents University of California student-workers and academic employees voted to approve a resolution to join the Boycott, Divestment and Sanctions movement against Israel.

The United Auto Workers Local 2865, which represents more than 13,000 teaching assistants, tutors, and other student-workers at the University of California, announced Wednesday that the measure was approved in the Dec. 4 vote 1411 to 749.

The union also announced that, during the vote, 1136 members pledged to personally adhere to the academic boycott of Israel.

With the vote, the UAW Local 2865 became the first major U.S. labor union to hold a membership vote on Israel and BDS.

The measure calls on the University of California and the UAW International to “divest from companies involved in Israeli occupation and apartheid”; and calls on the U.S. government to end military aid to Israel.

Some 53 percent of voting members also pledged not to “take part in any research, conferences, events, exchange programs, or other activities that are sponsored by Israeli universities complicit in the occupation of Palestine and the settler-colonial policies of the state of Israel” until the Israeli universities “take steps to end complicity with dispossession, occupation, and apartheid.”

The pro-Israel advocacy organization StandWithUs, which is active on UC campuses, in a statement condemned UAW 2865 for voting in favor of the divestment measure.

“While it masquerades as a human rights movement that seeks a better life for Palestinians, BDS’s true goal is the elimination of Israel and the end of Jewish self-determination. Indeed, at an event organized by the UAW 2865 BDS Caucus, one of the speakers explicitly stated that ‘bringing down Israel really will benefit everyone in the world,’” StandWithUs said in a statement issued Wednesday evening.

The group accused the union of holding Israel to a “double standard,” in particular by rejecting a proposal to boycott major human rights violators including the governments of Qatar, Russia, and China.