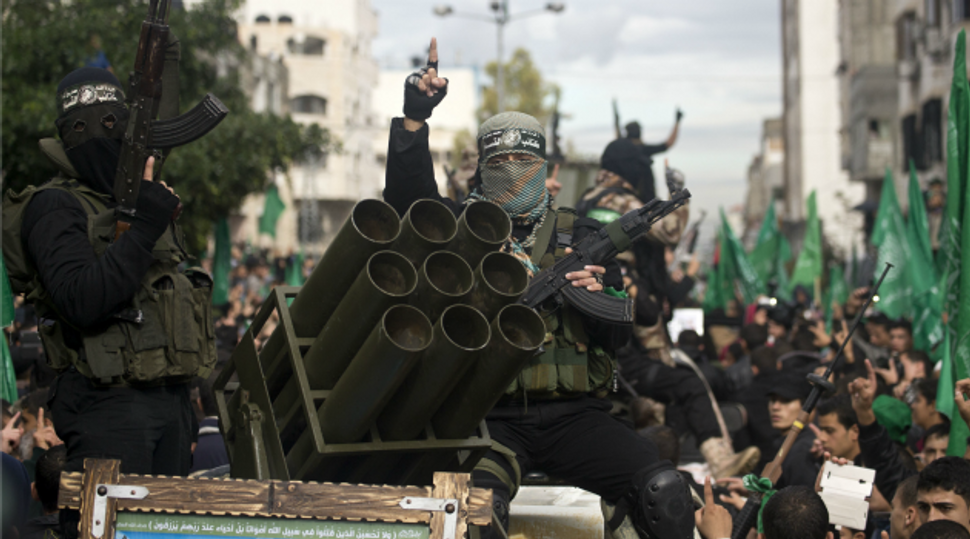 Vowing to destroy Israel, Hamas paraded some 2,000 of its armed fighters and truck-mounted rockets through Gaza on Sunday, marking its 27th anniversary with its biggest show of force since the end of the Gaza war this summer.

A ceasefire in August halted 50 days of fighting with Israel in which local health officials said more than 2,100 Palestinians, most of them civilians, were killed. Israel put the number of its dead at 67 soldiers and six civilians.

“This illusion called Israel will be removed. It will be removed at the hands of the Qassam Brigades,” said Khalil al-Hayya, a top Hamas leader, referring to the movement’s armed wing.

In recent years, some Hamas leaders have said they would accept a Palestinian state on land Israel occupied in a 1967 war in return for a long-term truce but would continue to refuse to recognize its enemy’s right to exist.

Abu Ubaida, the brigades’ spokesman, said another confrontation with Israel might be inevitable unless tens of thousands of homes damaged or destroyed in the Gaza Strip in last summer’s conflict are rebuilt soon.

“We will accept no less than the rebuilding of everything that was destroyed by the savage Zionist aggression,” said the masked spokesman, whose group is shunned by the West as a terrorist organization.

Palestinians have voiced disappointment over the slow pace of reconstruction and a limited flow of building material into Gaza since international donors pledged more than $5 billion in October.

Both Israel and Egypt – which is battling Islamist militants in neighboring Sinai – are concerned Hamas could use such material for weaponry.

Israel has said Hamas has been test-firing rockets into the Mediterranean in recent weeks and Gaza residents have reported hearing explosions. Hamas has neither confirmed nor denied such tests.

Trucks carrying what Hamas said were three-long range rockets, and other vehicles with multiple-launcher rockets drove in the parade. A drone with Hamas markings was on one flatbed truck, and another unmanned aircraft, identified by the group as one of its own, flew overhead, as did an Israeli fighter jet.

During the war, Hamas long-range rockets disrupted daily life in Israel’s major cities. Most were intercepted by the Iron Dome anti-missile system.

Addressing a crowd of several thousand in the rain, Abu Abaida praised Iran for supplying Hamas with money and weapons. Relations with Tehran have been strained by Hamas’s hostility toward Iran’s closest regional ally, Syrian President Bashar al-Assad.

Hamas seized control of the Gaza Strip in 2007 from Fatah forces loyal to Palestinian President Mahmoud Abbas. Both groups signed a unity deal in April but are divided over how to administer the Gaza Strip.