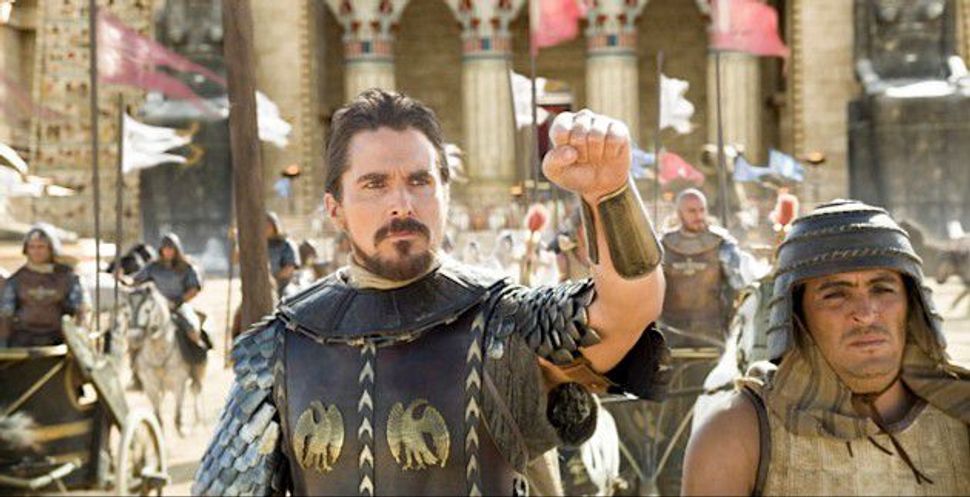 “Exodus: Gods and Kings,” an action-filled epic starring Christian Bale as Biblical leader Moses, marched to the top of U.S. and Canadian movie charts, collecting $24.5 million in ticket sales over the weekend.

The multitudes of moviegoers for “Exodus” knocked “The Hunger Games: Mockingjay Part 1” to second place, according to estimates from tracking firm Rentrak. The third film in the dystopian thriller series starring Jennifer Lawrence earned $13.2 million at domestic theaters, bringing its total to $277.4 million.

“Exodus,” helmed by British director Ridley Scott, portrays Moses as a reluctant prophet who rises up against the pharaoh.

While the $140 million movie fell short of Box Office Mojo’s projection of a $29 million domestic debut, its studio said it was in line with its expectations. It added $18.8 million from international markets for a weekend total of $43.3 million.

“It played to a very diverse audience, and in Hispanic markets was well above the norm,” said Spencer Klein, senior vice president and general sales manager for 20th Century Fox, the unit of 21st Century Fox that released the film.

“This diversity is a very good indication for long-term playability,” Klein added.

“Exodus” played in 3,503 theaters, while “Top Five” was shown in just 979. The well-reviewed film stars Rock, who also wrote and directed, as a troubled comedian who yearns to be taken seriously after becoming famous playing a character wearing a bear suit.

Comic heavyweights Cedric the Entertainer, Kevin Hart, Tracy Morgan and JB Smoove co-star along with Rosario Dawson. The film, released by Viacom Inc’s Paramount Pictures, will expand significantly over the next two weeks.

One of the season’s biggest film’s, Warner Bros’ “The Hobbit: The Battle of the Five Armies,” has its U.S. opening next week. It took in $117.6 million on international screens.