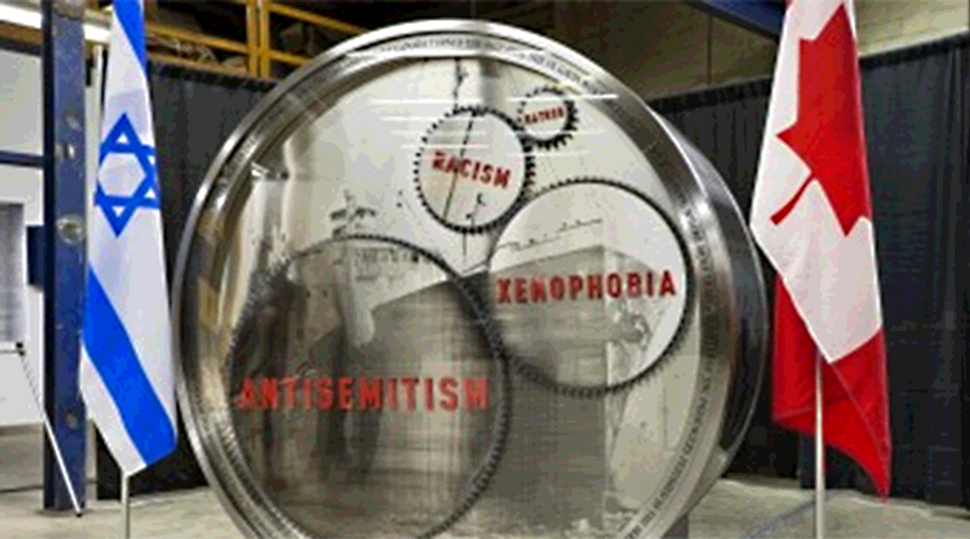 The Wheel of Conscience monument commemorates the doomed Holocaust-era voyage of the M.S. St. Louis. Image by Canadian Museum of Immigration at Pier 21

(JTA) — Mere days after the Wheel of Conscience was unveiled in January 2011, it broke down — something that would happen to the Daniel Libeskind-designed Holocaust monument twice more within the year.

In January 2012, the wheel broke again and was sent from its home at the Museum of Immigration at Pier 21, in Halifax, Nova Scotia, for repairs at a Toronto warehouse.

Ever since, that’s where Canada’s first and only Holocaust monument outside a Jewish community institution has been sitting and, in the words of Bernie Farber, former CEO of the Canadian Jewish Congress, “collecting dust.” “It’s really a slap in the face for Holocaust survivors,” Farber said. (The Centre for Israel and Jewish Affairs, or CIJA, absorbed the Canadian Jewish Congress in 2011, but the wheel remains the property of the CJC.)

Three years on, it is unclear if the wheel will ever return to Halifax — and the Jewish community is divided over whether it belonged there in the first place.

The Wheel of Conscience, which features four interlocking, mechanical rotating gears, commemorates the doomed voyage of the M.S. St. Louis, a ship carrying 937 refugees fleeing Nazi Germany in 1939. Wandering at sea for nearly a month, the

St. Louis was turned away at ports in Havana and Miami before Canadian authorities denied it safe harbor in Halifax. The ship ultimately returned to Europe, where 254 of its passengers died in the Holocaust.

The wheel’s four glass-encased gears are labeled with four words: anti-Semitism, xenophobia, hatred and racism. As they rotate, the gears slowly create and deconstruct a black-and-white image of the St. Louis.

Libeskind, the internationally prominent architect who designed the Berlin Jewish Museum, has said the drawn-out process is meant to represent the bureaucratic “gears” of Canada’s prewar government that rejected the ocean liner. The back of the wheel is emblazoned with the entire passenger manifest.

According to Farber, who visited the monument at the warehouse in mid-December, the wheel has been in working order for about a year. Still, it remains closed to the public.

Pier 21 CEO Marie Chapman, a federally funded national museum, and Shimon Fogel, CEO of CIJA, an advocacy organization affiliated with the Jewish Federations of Canada, have blamed the wheel’s mechanical failures on coastal environmental factors such as humidity and constant shifts in pressure and temperature. Chapman said the wheel emitted a burning smell while its gears were rotating.

“It’s a beautiful one-off design that for whatever reason doesn’t work when it gets here,” she said.

The monument, which was built with a $500,000 grant from the Canadian government, has also fallen victim to simple carelessness. It broke in January 2012 after workers lost control and dropped the wheel while unloading it from a truck into the museum.

It had just arrived back in Halifax from Toronto after a round of repairs. Chapman said the wheel has no doubt had a “difficult time” in Halifax, but stressed that it will always have a home on the East Coast.

But, she added, “It’s not the only place it could be.”

The question, then, is where the Holocaust memorial belongs — at Pier 21, its intended but ill-fated home, or another site, such as the new Canadian Museum for Human Rights, in Winnipeg, or the outdoor National Holocaust Monument, which Libeskind will design and is expected to open in Ottawa next year.

There is little consensus, however, as to where the Wheel of Conscience’s frustrating journey should come to an end.

In an interview with JTA, Fogel, whose organization is working with Pier 21 to resolve the issue, said the Holocaust memorial site in Ottawa would be an ideal location. The federal Department of Canadian Heritage said in a statement that CIJA and the museum are “working to find a home for the Wheel that is closer to the manufacturer” and “provides a more appropriate environment.”

In other words, not Halifax, home to approximately 1,500 Jews. (Pier 21 is currently closed for renovations, but is slated to reopen in May.)

But Sidney Zoltak, co-president of the Canadian Association of Holocaust Survivors and Descendants, said Pier 21 is the only place for a monument remembering one of the darkest moments in Canadian immigration history. Had the St. Louis been permitted to dock in Halifax, its passengers almost certainly would have entered Canada at Pier 21, which like Ellis Island was a major point of debarkation for thousands of immigrants to North America.

For Zoltak, a Polish Holocaust survivor who landed at Pier 21 in May 1948, the decision to station a federally funded memorial to a failure of Canadian immigration policy at one of the country’s historic immigration hubs was a symbolic apology by the government.

“If you take that monument away and put it somewhere else, that apology, as far as I’m concerned, is not there,” he said.