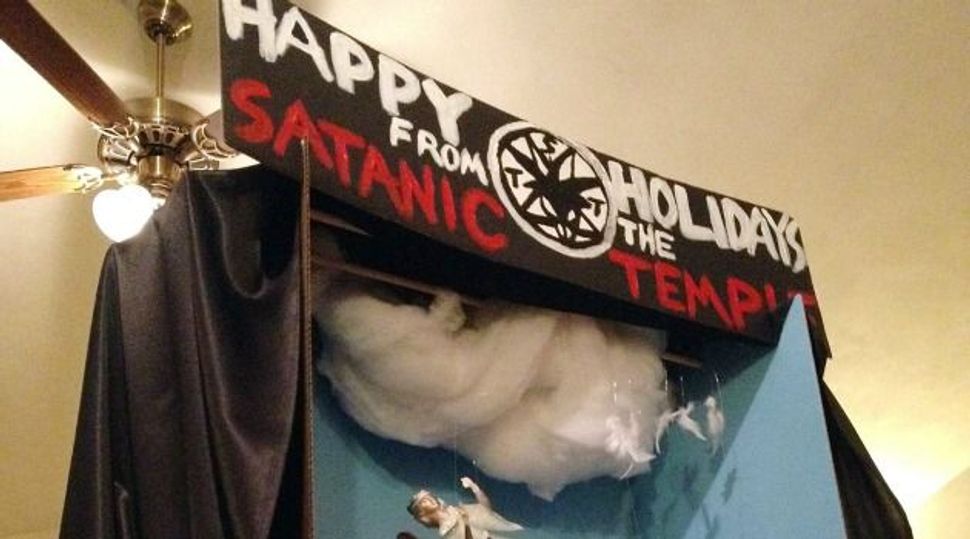 An atheist display at the Florida Capitol Rotunda in Tallahassee was damaged by an angry visitor.

A mocking holiday display depicting an angel falling into the pit of hell was deliberately knocked off its table in Florida’s Capitol rotunda Tuesday, but was quickly restored by a local atheist leader whose group sponsored the exhibit.

Capitol police detained a Tallahassee woman who they said knocked over the display, which carried the tagline: “Happy holidays from the Satanic Temple.”

John Porgal, regional director of American Atheists, said he was not surprised someone had damaged the display, which he had installed in the Capitol just a day earlier.

“I was really surprised that it took this long,” he said. “I was really expecting it to be damaged because of the religious part of our society.”

Susan Hemeryck, 54, was charged with criminal mischief in the incident, the Florida Department of Law Enforcement said. Police said in their arrest report that she told them she was sorry, but that she “had to take the Satanic display.”

Capitol administrators have declared the government building’s first floor a public forum in which religious displays – or symbols mocking them – can be placed for seven days at a time. Last week, the International House of Prayer and some Christian ministers put a manger scene in front of the hall to the offices of Governor Rick Scott and Attorney General Pam Bondi.

A half-dozen other seasonal displays, including a tall menorah, are also in the rotunda.

So were some satiric items, like a six-foot (183-cm) “Festivus” pole made out of 16 beer cans, a reference to the comedic plot of an old “Seinfeld” show. There was also an office chair with a tangle of noodle-like strings and a large pair of eyes, purporting to represent the parody religion the “Church of the Flying Spaghetti Monster,” initially invoked in a letter to the Kansas State Board of Education and later appearing in a book.

The large manger was removed on Monday, when its seven days were up, but another Christian ministry placed a painting of the Nativity nearby.

Porgal’s display initially showed an angel falling into a field of paper flames.

The string suspending the angel was broken when the exhibit was knocked over, so he placed the angel upright amid the paper flames.

“She’s in hell now,” Porgal said of the angel. “They’ve actually caused her to go to hell.”