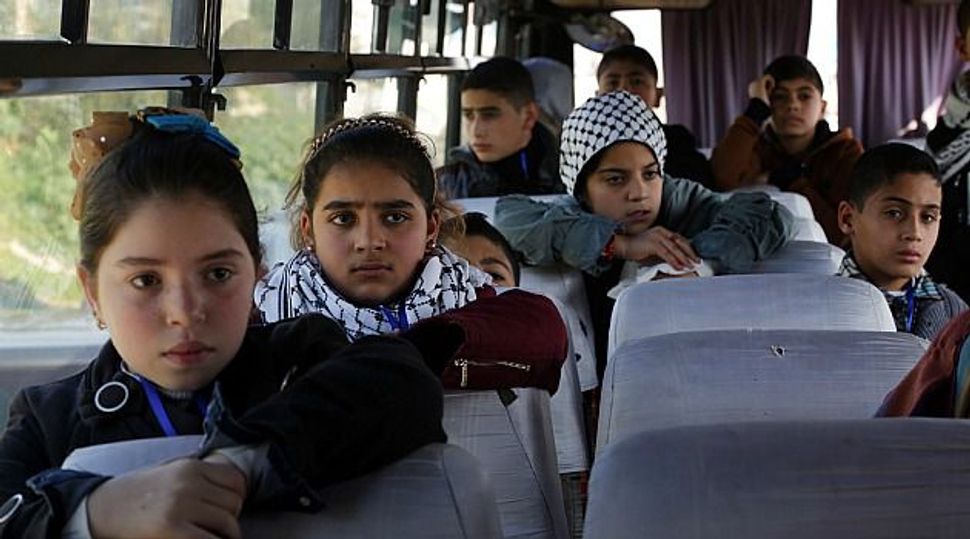 Palestinian children on a planned goodwill trip wait on a bus at the Israeli border. Their visit was scrapped after Hamas objected to the plan. Image by getty images

(Reuters) — Hamas authorities in the Gaza Strip prevented on Sunday a group of Palestinian children who lost parents in the July-August war with Israel from making a rare goodwill visit to the Jewish state, organizers of the trip said.

Israeli peace activists said they had secured permission from the military to admit the 37 children and five accompanying adults for a week-long tour of Israel and the occupied West Bank, seat of Palestinian President Mahmoud Abbas’s government.

Yoel Marshak, an activist named on the permit, said the group included children of Hamas fighters killed in the 50-day war, which according to the Gaza Health Ministry claimed more than 2,100 Palestinian lives, most of them non-combatants. Israel put the number of its dead at 67 troops and 6 civilians.

During their visit, Marshak said, the children were to have toured Arab towns in Israel as well as southern areas that had been under threat of Gaza rockets. They were also scheduled to attend a performance by a Jewish-Arab band and visit a mixed-race school, the Tel Aviv beach and a nearby safari.

The schedule also included a meeting with Abbas in Ramallah.

Goodwill visits to Israel from Gaza are rare given ongoing hostility with Islamist Hamas, though Palestinian patients from the impoverished enclave are regularly admitted for pressing medical treatment.

Eyad Al-Bozom, spokesman for the Interior Ministry in Gaza, said the children had been stopped from crossing into Israel “to preserve the culture and tradition of our people” and because they were slated to visit “suspicious” sites. He did not elaborate.

Malek Freij, director of the charity Candle for Peace which was also named on the children’s Israeli military-issued entry permit, said he and fellow organizers had sent 40 truckloads of aid into Gaza during the war and had previously hosted a small number of Palestinian orphans.

He said that this time, advance Israeli media reports of the children’s planned visit apparently led Hamas to cancel it.

“They (Gaza authorities) thought that Israel wants to exploit these children, and that’s a mistake,” Freij told Reuters next to the empty bus awaiting the group on the Israeli side of the Gaza border.