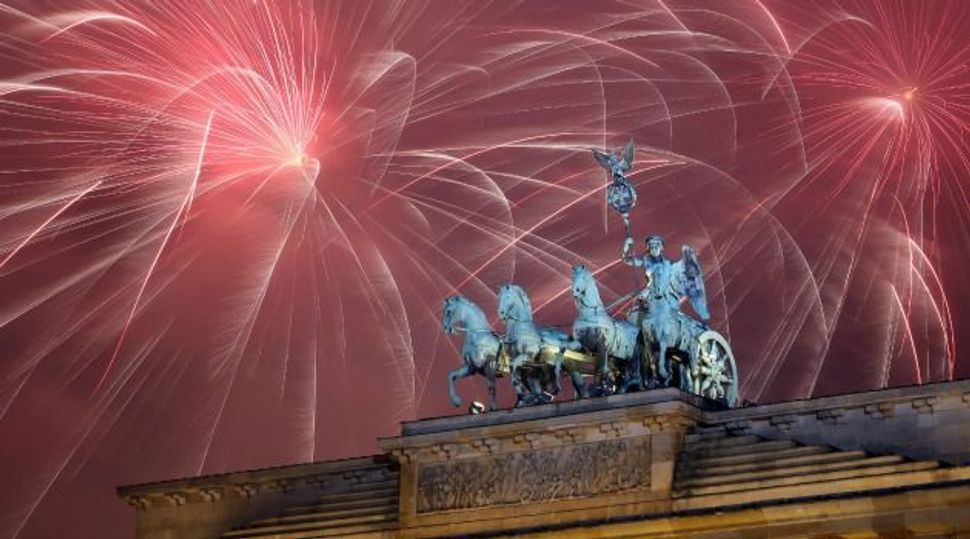 Fireworks erupt above Berlin’s Brandenburg Gate on New Year’s Eve, just minutes before a Jewish man was beaten for objecting to anti-Semitic songs on the city’s subway. Image by getty images

A Jewish man was badly beaten by several men in the center of Berlin on New Year’s Eve, after he asked them to stop singing anti-Semitic songs.

The victim, Shahak Shapira, 26, suffered bruises and a head laceration. He said the assailants were “southern European” in appearance and spoke both German and Arabic. Police say that cell phone videos Shapira took during the attack should be helpful in finding the perpetrators.

The incident took place early on Jan. 1, on an underground city train in the Kreuzberg section of Berlin, according to German news reports.

Police said the young man, whose national identity has not been released, witnessed seven men singing anti-Semitic songs on the train. He reportedly asked them to stop, and recorded the scene on his cell phone.

Reaching a central station, the assailants exited with the young man and demanded that he erase the recording. When he refused, they allegedly spit on him, kicked him and punched him in the head.

The attackers fled the scene when security staff of the Berlin transit authority approached.

Police denied earlier reports that the perpetrators appeared to be right-wing extremists.

There have been several violent anti-Semitic attacks registered in Berlin in recent months. In July, a Jewish man wearing a cap with a Jewish star was beaten. In November, an Israeli tourist was punched and kicked by four attackers in the Charlottenburg district of former West Berlin.