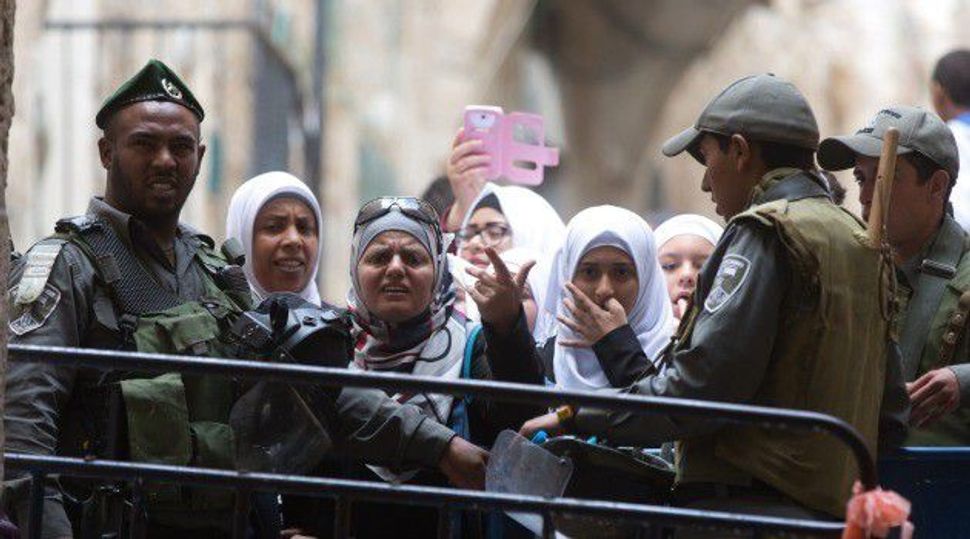 (Reuters) — Israel shut down three local Islamist groups on Monday, accusing them of stoking tensions at a contested shrine in occupied East Jerusalem that has seen increased visits by Jews.

Al Aqsa mosque compound in East Jerusalem is Islam’s third-holiest site and the vestige of Judaism’s ancient temples. Captured by Israel from Jordan in a 1967 war, it is a focus of Palestinian statehood hopes that Jewish ultra-nationalists oppose.

Israeli police enforce exclusively Muslim prayer at the site, a ban some Jewish activists have campaigned to overturn with stepped-up visits that have sometimes sparked violent confrontations, exacerbating Palestinian anger over Israel’s July-August war in Gaza.

Israel’s Shin Bet security service said it shut down the three organizations in the northern town of Nazareth that had been set up last year by the Islamic Movement, which has a following among the Jewish state’s 20 percent Arab minority.

The groups – Al Aqsa Champions, Muslim Women for Al Aqsa and Al Fajr Foundation for Culture and Literature – paid activists to use “verbal and even physical violence” against visitors to the Jerusalem shrine with the goal of “agitating and stirring up emotions,” the Shin Bet said.

Israeli Defense Minister Moshe Yaalon outlawed all three groups last month. The ministry has the authority to outlaw organizations that it deems a threat to national security. The Shin Bet implemented the ministry’s ban.

The Islamic Movement denied wrongdoing in a statement that related to two of the groups.

Al Aqsa Champions is “a media organization (that is) professional and balanced and focuses only on events inside the mosque” and Muslim Women for Al Aqsa “organizes study for women inside the mosque,” the Islamic Movement said in a statement.

Israel has sought to contain al Aqsa violence by limiting Palestinian access at times. The Shin Bet described such violence as “a blow to Israeli sovereignty at the site.”

Israel annexed East Jerusalem, in whose walled Old City the compound is located, as part of its capital. This status is not recognized abroad. Many world powers support the Palestinians’ goal of setting up their own future capital in East Jerusalem.

Jordan, whose religious authorities have run the al Aqsa compound since before the 1967 war, withdrew its ambassador from Israel in November in protest at the situation at the site, saying the countries’ two-decade-old peace accord was at risk.