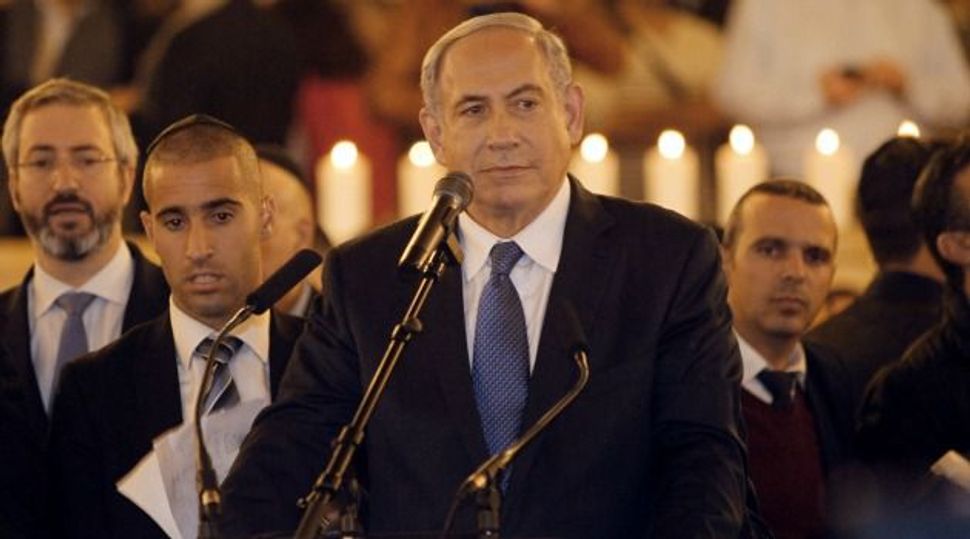 (Reuters) — In the cold reality of politics, the killing of four French Jews in a Paris supermarket seems to have helped Prime Minister Benjamin Netanyahu deliver a strong message to Israeli voters that he has their back.

With two months to go until Israel’s national election, Netanyahu – who marched with dozens of world leaders at a memorial rally for the victims of last week’s Islamist militant attacks in the French capital – heads a crowded pack of candidates despite the challenge of a new center-left alliance.

Accusing Netanyahu of missteps, critics saw comedy amid the tragedy as he maneuvered his way into a front-row position at the rally in honor of the 17 dead in the shooting assaults on the satirical journal Charlie Hebdo and in the kosher market.

It even spawned an on-line game, “Push the Bibi” – Netanyahu’s nickname – in which players could propel him through the crowd to occupy pride of place next to French President Francois Hollande and German Chancellor Angela Merkel.

Despite the ridicule, opinion polls show no real change among the two top contenders in the Israeli race, in which the right-wing Netanyahu has made security and the threat of a radicalized Middle East the main issues.

Netanyahu’s Likud and center-left Labor remained neck-and-neck, with his party best positioned to form a governing coalition with smaller factions after the March 17 ballot.

A poll published on Wednesday by the Israel Democracy Institute and Tel Aviv University found 60 percent of Israeli Jews believe a right-wing bloc has the best chance of forming the next government, with 55 percent preferring that outcome.

The Israeli leader even won grudging praise in the left-wing Haaretz newspaper – one of his strongest critics – for reminding French Jews that they can always migrate to the Jewish state.

“Contempt for his … pushiness shouldn’t obscure the fact that he succeeded in sending a clear message over the head of … Hollande, and to be honest, over the heads of all the leaders of Israel’s political system: ‘Come home. I’ll protect you,’” Haaretz commentator Tal Niv wrote.

Back home, after arranging for the four Jewish victims of the supermarket attack to be buried in Israel, Netanyahu attended their funeral in Jerusalem and railed in his eulogy against the “poisonous fanaticism” of militant Islam.

It was a familiar theme of a Likud campaign that has hailed Netanyahu, seeking a fourth term as premier, as the Israeli leader best able to keep the country safe.

The same poll showed that 34 percent of Jewish voters in Israel believed Netanyahu was best suited to be the next prime minister. Labor Party chief Isaac Herzog took second place, with just 17.7 percent.

She has also cited criticism the United States and European partners have frequently leveled at Netanyahu over Jewish settlement expansion in occupied territory and the collapse of peace negotiations with the Palestinians.

A new centrist party, led by Moshe Kahlon, a former communications minister who delighted Israelis by slashing cellular phone charges, could be the wild card in any coalition-building. It is forecast to win nine of parliament’s 120 seats, compared with 23 or 24 for each of Likud and Labor.

Although Herzog has a proud pedigree in Israel – his late father Chaim served as its president – Livni has maintained a higher political profile as a former foreign minister who led the once-powerful centrist Kadima party.

Herzog was nicknamed “Buji” (pronounced Boo-zhee) as a child by his mother, and his baby-faced looks and thin voice have spawned a Facebook page entitled “Buji does cute things” that superimposes his face on infants at play.

Netanyahu rarely misses an opportunity to refer to Herzog as “Buji,” apparently hoping it will resonate with voters as a moniker with even less gravitas than “Bibi.”