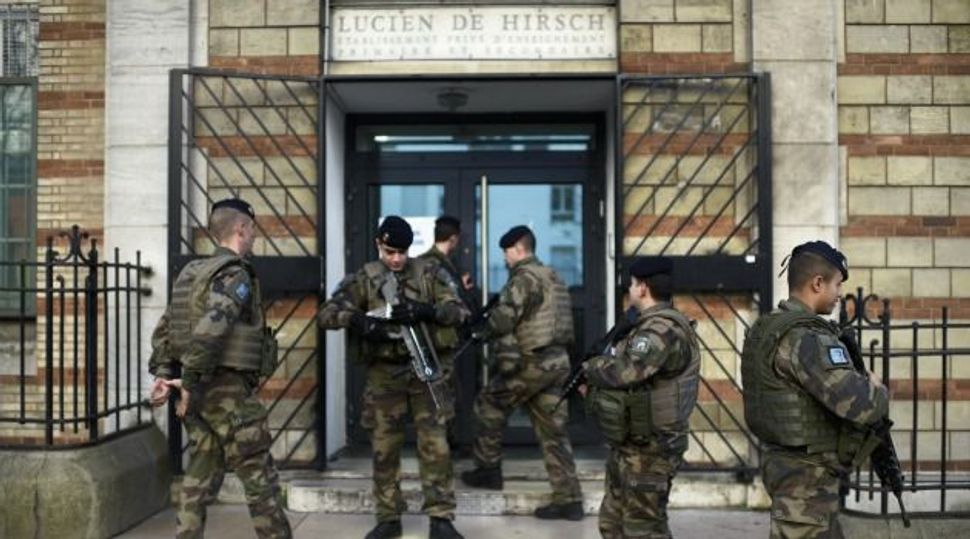 French soldiers patrol outside a Jewish school in Paris. Image by getty images

Rampant anti-Semitism in France’s public schools and threats against Jewish ones are giving a major push to Jewish emigration, a leader of French Jewry said.

Roger Cukierman, president of the CRIF federation of French Jewish communities, discussed the choices facing parents from his community on Thursday, during a conference call with members of the Conference of Presidents of Major Jewish American Organizations, an umbrella group that represents 50 national Jewish organizations in the United States.

Cukierman focused in his talk on the effects of a terrorist attack on Jan. 9 that left four Jews dead at a kosher shop near Paris. “The atmosphere for Jews in France is pretty bad,” he said.

Christian private schools are aemerging as a preferred choice for many Jewish parents, according to Cukierman. He estimated that a third of French Jewish parents send their children to public schools, and that of the French Jews who leave, about two thirds go to Israel.

Immigration to Israel by Jews, or aliyah, from France in 2014 stood at approximately 7,000 people — nearly four times the amount of Jews who made aliyah in 2012.

Cukierman also spoke of mixed feelings regarding the deployment of 10,000 French troops around Jewish schools and institutions following the attack.

“On the one hand, we are satisfied with that, on the other, imagine children seeing in front of the school army personnel with machineguns and imagine the parents when they have to think that they are leaving their children in a situation which may become dangerous,” he said.