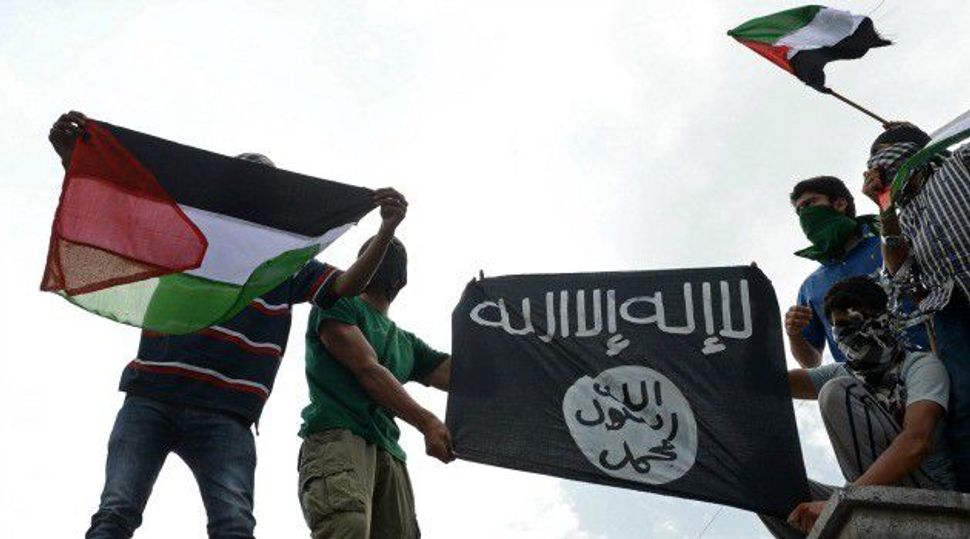 Common Cause? Demonstrators hold up Palestinian flags and a flag of the Islamic State of Iraq and the Levant (ISIL) during a demonstration against Israeli military operations in Gaza. Image by Getty Images

Israel said on Sunday it had cracked the first Islamic State cell on its soil, made up of seven Arab citizens who would be prosecuted on charges of planning attacks in the Jewish state and communicating with the insurgent group in Syria.

The defendants, including a lawyer who was representing himself in court, denied the charges of belonging to an illegal group, aiding terrorism and contacting foreign agents, a Justice Ministry spokesman said after a gag order on the case was eased.

Dozens of Israeli Arabs and Palestinians have traveled to Syria and Iraq to join insurgent groups. Israel’s Shin Bet domestic intelligence agency said on Jan. 4 it had broken up a cell in the occupied West Bank linked to Islamic State.

The seven Israeli Arab suspects, aged 22 to 40 and all from the northern Galilee region, were arrested in November and December and told investigators they had undergone radical Islamist studies and prepared weapons and funding for attacks, the Shin Bet said in a statement.

It said one of the defendants had tried to leave Israel in July in order to make his way to Syria but had been detained by authorities at Tel Aviv’s Ben Gurion airport.

Israel’s Interior Ministry said last month it had barred five Arab citizens from traveling abroad for half a year, based on intelligence tip-offs they planned to join jihadi groups in Syria or Iraq.

The ministry is separately examining the possibility of revoking the citizenship of an Israeli Arab suspected of fighting with Islamic State in Syria, from which he traveled to Turkey after being wounded, officials said.

Some Israeli Arabs who returned home after helping rebels trying to topple Syrian President Bashar al-Assad have sought to mitigate criminal charges against them by noting that Damascus is an adversary of Israel’s.

Ahmed Massalha, a lawyer representing three of the seven suspects, said his clients posed no threat to Israel.

“Their entire intention was to restore the Muslim caliphate in Arab countries, by eliminating regimes like Assad’s,” he told Army Radio.

The Shin Bet said on Sunday it had arrested an eighth Arab citizen, from the southern Negev region, on suspicion of joining Islamic State while he underwent medical studies in Jordan.