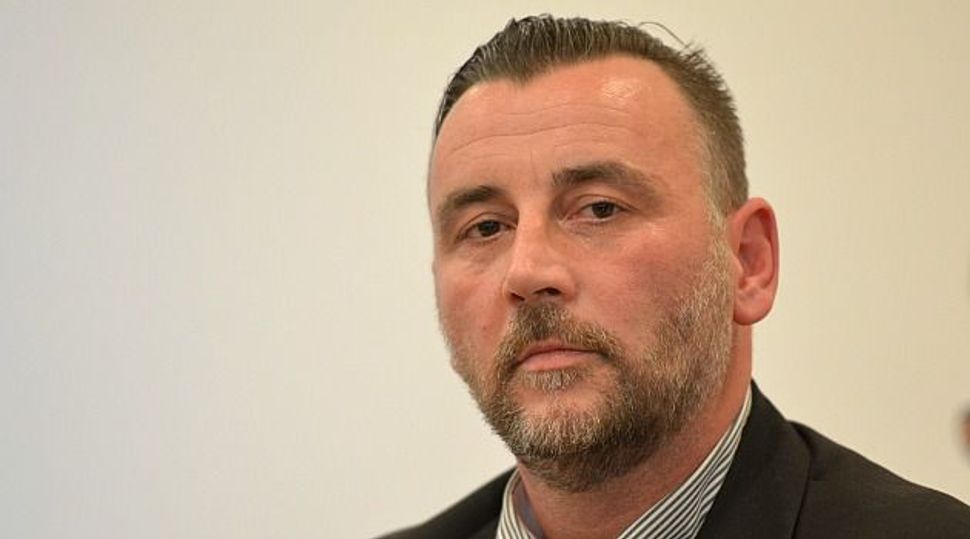 The head of a growing anti-immigrant, anti-Islam movement in Germany stepped down under pressure after photos of him dressed as Hitler appeared in the country’s most popular daily.

Lutz Bachmann quit the Pegida organization after the Bild Zeitung splashed the 2-year-old images gleaned from Facebook on its front page Wednesday.

Bachmann apologized to his followers for having damaged Pegida’s interests. The right-populist, anti-Islam political party Alternative for Germany also made a point of criticizing the photos as “tasteless.”

On Wednesday, he called the Hitler photos a mere joke.

“I took it at the barber shop for a satirical audio book called ‘He’s back,’” Bachmann said, adding that he had only been making fun of himself.

Pegida, which the Central Council of Jews in Germany recently called an “extremely dangerous” movement, was to hold one of its regular anti-immigrant demonstrations in Leipzig on Wednesday. Police expected tens of thousands of demonstrators, and potentially even more counterdemonstrators, according to several German news services.

The original plan to march in Dresden was banned due to threats of violence.

Bachmann already is under investigation in Dresden on potential charges of incitement to hate over his alleged anti-refugee comments on Facebook last September. Reportedly it was the comments and not the Hitler photo that irked other Pegida leaders.

Pegida spokeswoman Kathrin Oertel told reporters that the “Hitler selfie” was defensible as satire. But “the sweeping insults against foreigners” were no longer tolerable, she said, citing past Facebook postings in which Bachmann referred to immigrants as “brutes,” “dirt sack” and “trash.”