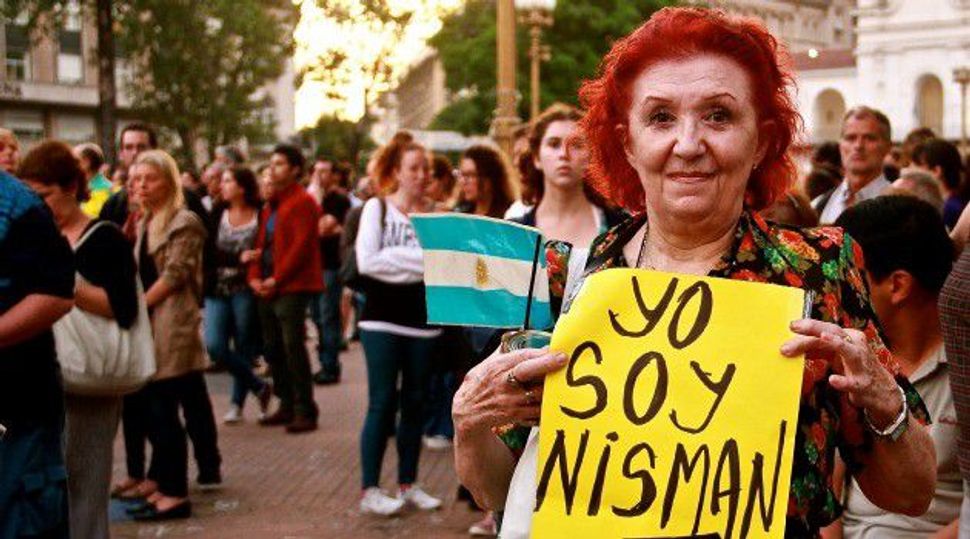 (Reuters) — The death of a prosecutor investigating the bombing of a Jewish community center was not a suicide, as was initially reported, Argentine President Cristina Fernandez said on Thursday.

Alberto Nisman, lead investigator into the 1994 attack on the AMIA Jewish center that killed 85 people, was found dead in his apartment late Sunday, a 22 caliber pistol by his side.

He had accused Fernandez of trying to derail his investigation into the bombing and was due to present his case to Congress hours later on Monday.

The government says two men who Nisman believed were deeply involved in the alleged cover-up of the 1994 attack had been falsely presented to him as state intelligence agents.

Fernandez said the deception discredited Nisman’s charges against her and points to a conspiracy to smear her name.

“They used him while he was alive and then they needed him dead,” she said in a post on Facebook, adding that his death was “sad and terrible.”

She did not say who killed him and no one has been arrested in the case, which has shocked Argentines. Social media networks are seething with conspiracy theories, some pointing at Fernandez and her government.

Thousands took to the streets this week to protest the slow pace of justice for the victims of the bombing and demanding answers to the questions around Nisman’s death.

With the economy shrinking and inflation in the double digits, the case has further weakened Fernandez’s popularity and is expected to help pro-market opposition candidates like Buenos Aires Mayor Mauricio Macri and congressman Sergio Massa in the presidential election in October.

Fernandez has been in office for seven years but is barred from running for a third consecutive term. Massa and Macri have criticized her for not going on television to try to calm nerves frayed by the scandal. Her main form of communication this week has been Facebook.

She again defended herself on Thursday.

“Nisman’s accusation not only collapses, but becomes a real political and legal scandal … That’s the key. Prosecutor Nisman did not know that the men identified as intelligence agents were in fact not,” she said.

“The spies who were not spies. The questions that turned into certainties. The suicide that I am now convinced was not a suicide.”

Argentine courts have accused a group of Iranians of planting the AMIA bomb. Nisman charged last week that Fernandez opened a secret back channel to Tehran as part of a plot to clear the suspects and whitewash the attack.

He said she was pushing to normalize relations with Iran as a step toward clinching a grains-for-oil deal that would help Argentina close its $7 billion per year energy deficit.

The government dismissed the charge as ridiculous.

It has suggested the scandal involves a power struggle at Argentina’s intelligence agency.

Antonio Stiusso, a senior Argentine spy, was fired in a December shake-up of the agency, where one of his duties was to help Nisman with the investigation into the 1994 bombing.

The government says it was Stiusso who falsely told Nisman that the two men who helped him build his case of a cover-up were state intelligence agents.

The man who on Saturday lent Nisman the gun used to kill him the following day has reportedly said Nisman was warned by Stiusso to take steps to protect himself from his own state-assigned bodyguards.

Fernandez said on Thursday that the 10 bodyguards should be investigated.