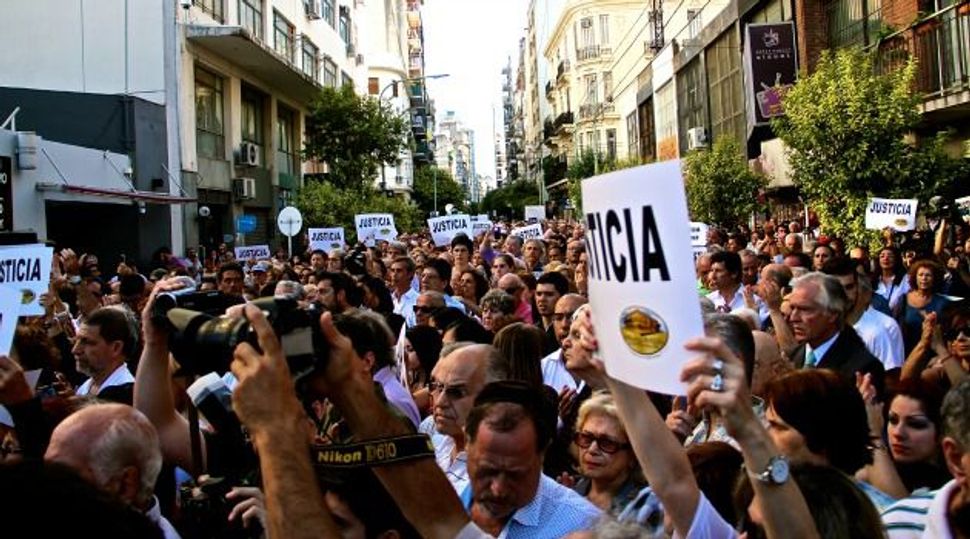 Argentine Jews demonstrate on Wednesday outside the AMIA community center where 85 people were killed in a 1994 terror attack. Image by kamilia lahrichi

(Reuters) — Alberto Nisman was working hard to prepare for a congressional hearing on his claim that Argentina’s president tried to whitewash Iran’s alleged involvement in a bombing that killed 85 people, a make-or-break day in his career as prosecutor.

In the spotlight since leveling his hefty accusations last week, Nisman needed to make a convincing case, based on a decade of work with spy agencies around the world.

So he put in the extra hours at his Buenos Aires apartment on Saturday. Friends described him as upbeat and determined ahead of his appearance and he was scheduling interviews with journalists for the coming days. He also reportedly wrote up a list of groceries he would ask his maid to buy on Monday.

But Nisman, 51, never made it to Monday. He was killed by a bullet to the head and his body found on the floor of his bathroom on Sunday night.

Officials initially said he apparently committed suicide with a 22 caliber gun borrowed from a distant colleague, and a source close to the judicial investigation who visited the scene told Reuters there was so much blood that no one could have left it without leaving a trace.

But from day one, most Argentines, including his family and friends, refused to believe Nisman committed suicide. The timing was too suspicious, the circumstances too mysterious, and they say he was simply not that kind of man.

“No one believes the suicide hypothesis,” said one person on Nisman’s investigative team, who declined to be named for fear of repercussions and preferred not to use his cellphone, believing it was tapped.

“He was very convinced of his ideas and prepared to see them through. He had received threats all his life and it never intimidated him,” he told Reuters.

President Cristina Fernandez has come around to that view, too, saying on Thursday that she was “convinced” it was not a suicide. People had led him astray in his investigation in order to smear her name and then “needed him dead,” she said.

She did not, however, say who ordered his death and no arrests have been made.

The case has convulsed Argentina and set off a storm of conspiracy theories, many pointing at Fernandez herself, Argentine intelligence services, or Iran, or all three.

Why would Nisman kill himself on the eve of the hearing in Congress after dedicating years to investigating the 1994 bombing of a Jewish community center in Buenos Aires and believing he was on the cusp of proving a cover-up at the highest levels of government?

If Nisman was so much under threat as to warrant the police assigning him 10 bodyguards, why was none of them in the building at the time?

When they could not contact him all of Sunday, why did they wait for his mother to arrive with a spare key in the evening rather than force the door open?

“The causes of the death are not clear … and clarification is today an imperative of maximum priority for all of Argentine society,” the president of the Jewish Association AMIA, Leonardo Jmelnitzky, said at an event in front of the center that was bombed in 1994.

“Once more a family has been destroyed – two girls are without a father, a mother will always cry for her son.”

Instead of vowing to shed light on the matter, Fernandez and her government have been on the defensive, trying to refute Nisman’s claims against her – that she wanted to block his investigation in order to normalize relations with Iran and get access to its oil.

Argentine courts have accused a group of Iranians of planting the bomb at the community center but Iran has always denied any involvement in the attack.

Some have suggested Nisman may have killed himself after realizing his report was based on false evidence. It was met last week with criticism that it relied too heavily on hearsay.

New findings over the past few days have cast doubt over Nisman’s state of mind.

Friends and colleagues say he appeared upbeat. When one asked him via Whatsapp on Saturday afternoon how he was getting on, his response was a photo of piles of documents and highlighters.

To a journalist for Clarin newspaper, Nicolas Winaski, he wrote “Everything will be known, Nicolas, you will see,” saying that he was “calm” and adding a smiley face to his message.

But that same day, Nisman asked to borrow a gun from a colleague, apparently saying he needed it for self-protection even though media reports say he already had guns registered in his name. The borrowed gun was the one found by his body.

The case keeps taking new twists. While the security ministry originally said it found Nisman’s flat locked from the inside, suggesting he was alone, the locksmith who forced entrance into the flat said the door was merely pulled shut with the keys in the lock.

The prosecutor probing the case has called for patience. She is waiting to talk with Nisman’s doctors and see the results of toxicological and psychopathological checks, and said she would not be influenced by the president’s comments.

“She is free to have an opinion like any citizen,” Viviana Fein said. “I am focused on my investigation, on what I will achieve and discover along with the judge working with me.”

Argentines say they have already waited more than 20 years for answers to the 1994 bombing and they fear justice won’t be done for Nisman either.

Whatever the outcome of the investigation is, the crisis has hurt the leftist Fernandez. While thousands of protesters gathered outside her residence this week, some shouting “murderer,” more sober critics have attacked her handling of the matter.

So far, she has limited her response to rambling Facebook posts.

Nisman’s death has raised serious doubts among Argentines about the intelligence service, the justice system and politics. Many have taken to social media to complain about the state of their country.

Jose Mujica, the outspoken president of the small, neighboring country of Uruguay, said he felt sorry for Argentina and that its justice system needs to clear up the case to maintain “the minimal confidence our societies need.”