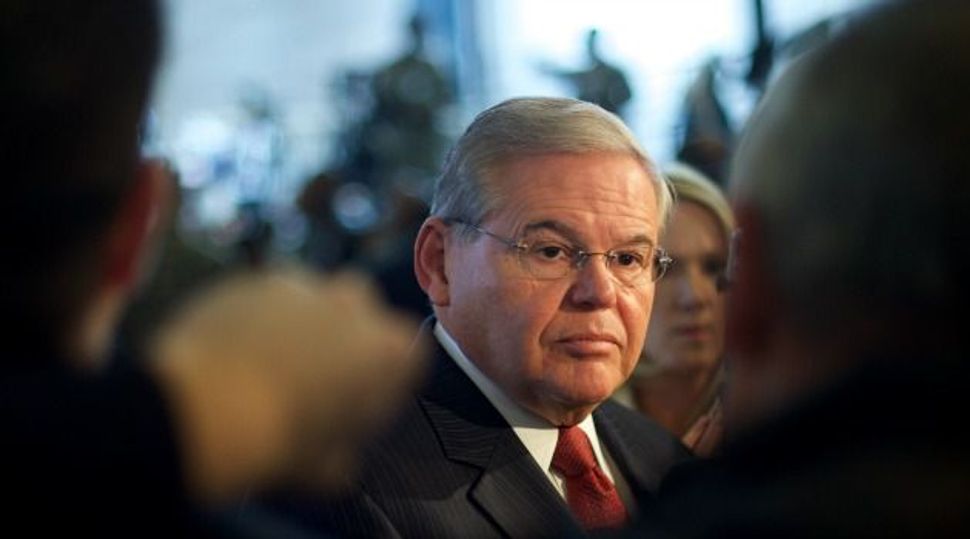 Sen. Robert Menendez and other Democrats have agreed to put off support for any new Iran sanctions measure until at least the end of March. Image by getty images

Several Democratic U.S. senators said on Tuesday they would give the Obama administration at least two more months to reach a nuclear deal with Iran before voting for tighter economic restrictions, easing the threat that Congress might override President Barack Obama’s veto of a new sanctions bill.

U.S. Senator Robert Menendez, co-author of the legislation that would tighten sanctions on Iran if there is no deal by the end of June, said he and other Democratic senators would not back passage of the bill until after March 24, and only in the absence of a framework agreement with Tehran.

Obama said a vote for more restrictions, which are strongly supported by Republican lawmakers, could upset negotiations under way, and pledged to veto any bill imposing new sanctions while talks are ongoing.

“Many of my Democratic colleagues and I have sent a letter to the president, telling him we will not support passage of the Kirk-Menendez bill on the Senate floor until after March 24, and only if there is no political framework agreement,” Menendez said at a Senate Banking Committee hearing.

He and his Democratic colleagues “remain hopeful” for a diplomatic solution, but Menendez said they are “deeply skeptical” about Iran’s commitment to making concessions that would show its nuclear program is peaceful by the deadline set by international negotiators.

The United States, Britain, China, France, Germany and, Russia have been negotiating with Iran, and all agreed to step up efforts to reach a political understanding by the end of March, with a view to a full-blown deal by a self-imposed June 30 deadline.

Many U.S. lawmakers – Republicans and Democrats – have been working to develop legislation to attract the 67 Senate votes needed to override an Obama veto. They say they want Congress to have a voice in the 18-month-long international negotiations with Iran.

With Republicans holding 54 seats in the 100-member chamber, they would need significant support from Obama’s fellow Democrats to pass legislation after a veto.

The Iran issue took on a strongly partisan tone in Washington last week, when Republican leaders announced they had invited Israeli Prime Minister Benjamin Netanyahu to address Congress on Iran, without consulting the Obama administration or congressional Democrats.

Netanyahu’s speech is scheduled for March 3, well before the March 24 deadline.

Deputy Secretary of State Antony Blinken said he had not seen the letter, but was amenable to Menendez’s plan: “We appreciate the recognition that our negotiators could use additional time and space.”

Menendez’s office did not immediately release the names of senators who had signed the letter to Obama. But other Democratic members of the banking committee said they supported delaying the plan.

“I cannot support any action that would needlessly undermine the chances for success in this effort,” Democratic Senator Joe Donnelly said, explaining why he favored holding off the vote.

Charles Schumer, the Senate’s No. 3 Democrat and a leading voice on U.S.-Israel relations, also said he supported the plan announced by Menendez.

Iran and the major powers are due to meet again in February after limited progress in talks in Geneva on Jan. 18.