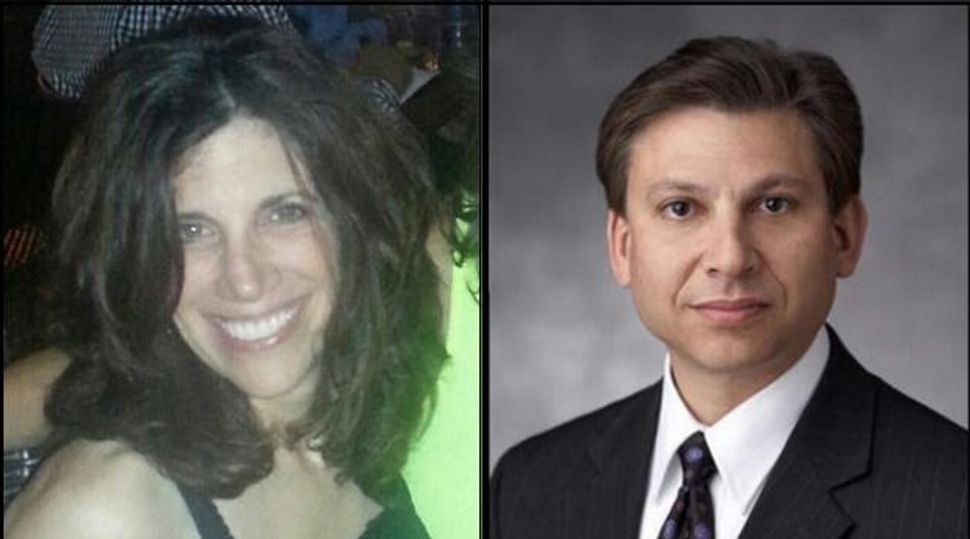 Final farewells for two of the 6 victims of this week’s fiery New York commuter train accident will be held two hours apart this morning, including the mother of three who was behind the wheel of the SUV the train slammed into on Tuesday night.

Friends and loved ones of Ellen Brody, 49, and Eric Vandercar, 53, will gather in their respective Westchester synagogues that were so integral to their families’ lives.

Between the two, they leave behind five children – she three daughters, he a daughter and a son.

Why Brody remained on the tracks after the crossing gate came down remains a mystery. Federal investigators – so far at least – have indicated that gate and area traffic lights were in working order and that the Wassaic-bound train out of Grand Central was not speeding.

A witness gave this account to The Journal News:

Rick Hope, longtime deputy commissioner of the White Plains Department of Public Works, was directly behind the SUV that was hit by the train at the Commerce Street crossing, and was most likely the last person to see the driver, Ellen Brody, alive. He said they were inching down the hill when the crossing gate, with its lights flashing, came down and hit the roof of the woman’s car before sliding off and getting stuck on the back.

There was no one behind me, so I backed up to make sure she had room. I thought she would back up too,” he said, “but she got out of her car, walked back, and was touching the gate. What struck me was how calm she was — she didn’t seem to be panicking, or in a hurry at all, even though the gate was down. She wasn’t in a hurry at all, but she had to have known that a train was coming.”

“She was there, and then she was gone, just like that. It was absolutely horrible.”

The SUV was dragged pushed along the tracks and set in motion a series of horrific events, including the thrusting of the third rail into the first car of the train, which was consumed by flames. Vandercar and the four other men who died Tuesday night were riding in that car.

Brody’s service will be first this morning, in Dobbs Ferry, at 10 a.m. at Chabad of the Rivertowns. She leaves behind her husband, writer Alan Brody, and daughters Lexi, Jules and Danielle, who graduated from and had their bat mitzvahs at Chabad Hebrew School.

Rabbi Benjy Silverman, who will preside at her service, told The JTA that Brody was a dedicated school mom who was “always smiling, very warm, always helping out.”

“They were very Jewishly proud, with strong connections to Israel,” Silverman said. “It was an important part of her life and her family’s life.”

The family home is in Scarsdale and Brody was on her way home from her job at a Chappaqua jewelry store.

Store owner Varda Singer said: “She cared about other people … She was a great mom, always full of life and energy.”

Vandercar’s wife Jill, and children, Jake and Sadie, will say their goodbyes at noon at Temple Shaaray Tefila in Mount Kisco.

A year earlier, the longtime former Morgan Stanley executive looked on proudly in the same temple as Jake was bar mitzvahed. Vandercar worked at Morgan for 27 years and a year ago left to become senior managing director at Mesirow Financial.

“Eric was not only a pillar in our industry, he was a great partner and friend to many,” the firm said.

A spokesman for Morgan said, “Those of us who worked with Eric for many years at Morgan Stanley are deeply saddened by this tragic loss. Our hearts and prayers go out to his family at this difficult time.”

But he was more than his work. The Journal News said he was live-music enthusiast who recorded concerts and shared tapes with other fans of his favorite bands, Phish, the Spin Doctors, and moe.

Vandercar was self-described extreme skier, advanced scuba diver, and whitewater rafting guide. When he saw The Allman Brothers’ farewell show last October at New York’s Beacon Theater, he posted on twitter that he had seen the band perform more than 200 times.