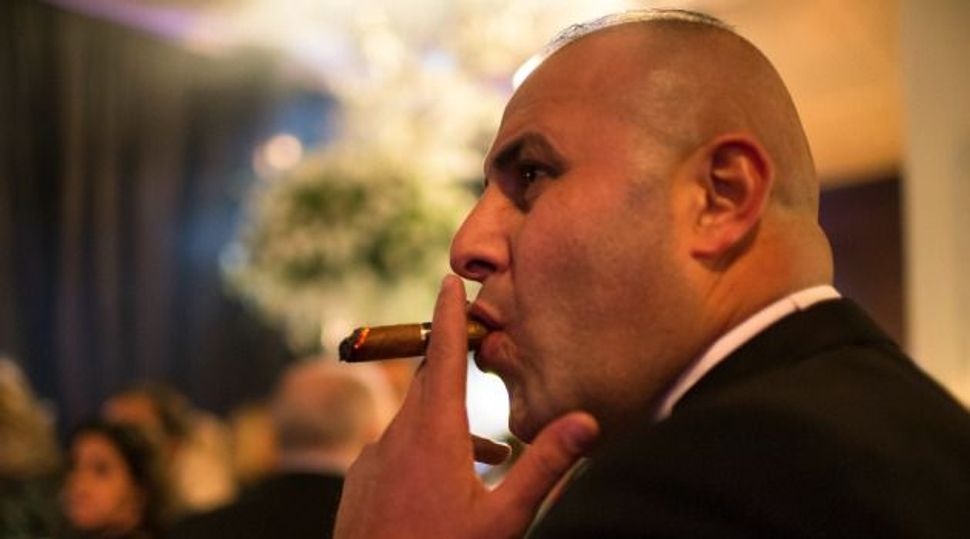 Russian immigrants make up a potent voting bloc in Israel. And with the decline of Avigdor Lieberman’s corruption-tainted party, some say it is up for grabs. Image by getty images

(Reuters) — In this seaside city once ruled by the Greeks and Phoenicians but now largely populated by Russians, the talk in the caviar-stocked delis and jewelry stores is of upcoming elections and Israel’s powerful Russian vote.

After the collapse of the Soviet Union in the 1990s, more than one million Russian speakers moved to Israel, many of them settling on the Mediterranean coast in cities like Ashkelon and Netanya, where Russian remains in daily use and Cyrillic script is as common on menus as vodka and smoked meats.

Given that Soviet migrants make up 20 percent of Israel’s Jewish population, their conservative, working-class vote has become significant in politics, a fact that remains the case ahead of closely fought parliamentary elections on March 17.

In the past, much of the “Russian vote” – which includes those of Ukrainian, Moldovan, Georgian and Belarussian heritage, among others – has gone to Yisrael Beitenu, a right-wing party led by Moldovan-born Foreign Minister Avigdor Lieberman.

But officials in Lieberman’s party are under investigation over allegations of corruption and opinion polls show its support falling – from a peak of 15 seats in the 120-seat Israeli parliament a few years ago, they now have 13 and are expected to win just six in next month’s vote.

As a result, the hunt is on to secure defectors, with not only Prime Minister Benjamin Netanyahu’s Likud party in the chase, but that of ultra-nationalist Economy Minister Naftali Bennett too, not to mention the center-left opposition.

“We’re seeing considerable movement from Lieberman’s party to my party,” Bennett, whose religious-nationalist Jewish Home party is expected to win up to 15 seats in the Knesset, told Reuters as he campaigned in Ashkelon.

“They are looking for a party of strength, standing strong on our values, our Jewish values, and also on security.”

MOSCOW ON THE MED

At Marina Polliack’s jewelry stand, Bennett was making in-roads. The Belarus-born businesswoman, 45, moved to Israel in 1997 and has warmed to his policies, which include opposition to the establishment of a Palestinian state.

“The Jews have only one state. The Arabs have many and history is repeating itself around the world, with anti-Semitism rising,” she said, pledging her support to Bennett.

Nearby at Gastronom Khoroso, a Russian deli where the shelves are piled high with caviar and Christmas chocolates, owner Genadi Sirotnikov, 59, leans towards Netanyahu.

“There aren’t many alternatives,” said the former Russian soldier, who moved to Israel in 1990. “Netanyahu is relatively strong, even if he doesn’t always give people what they want.”

Sirotnikov says younger Russians do not share the older generation’s political values, however.

“We have a common basis of fear,” he said of his generation, which was fixated on escaping communism. “The generation that grew up here doesn’t have that. They are more free-thinking.”

Marik Stern moved to Israel from Moscow when he was just two. His late father ran in Lieberman’s party in the 1990s, but the 36-year-old son supports the Labor party, which has formed the Zionist Union with the centrist Hatnua party.

“A lot of us have developed a political identity different to our parents,” said Stern. “They came here with a great antagonism to socialism and anything that has even a whiff of Soviet to it. They are very capitalist.”

Yet while there are signs of the political identity shifting away from its conservative-religious roots towards centrists, it does not appear to have major momentum yet.

Alex Tenzer, a prominent publicist born in Kiev who immigrated to Israel in 1976, believes the Zionist Union has missed the boat this time around by not focusing its campaign on issues such as the high cost of housing and the low level of pensions, two issues close to Russian hearts.

“The Zionist Union is out of touch with the (Russian) sector,” said Tenzer. “Because of Russian immigration, there is a great chance that Netanyahu will be prime minister again.”

Abraham Diskin, a professor of political science at Hebrew University, also believes it is too early to expect a fundamental shift in the Russian community’s allegiances.

“The Likud will be the main one to profit,” he said, referring to Netanyahu’s right-wing party, which is expected to win around 24 seats in the Knesset, neck-and-neck with the center-left alliance, known as the Zionist Union.