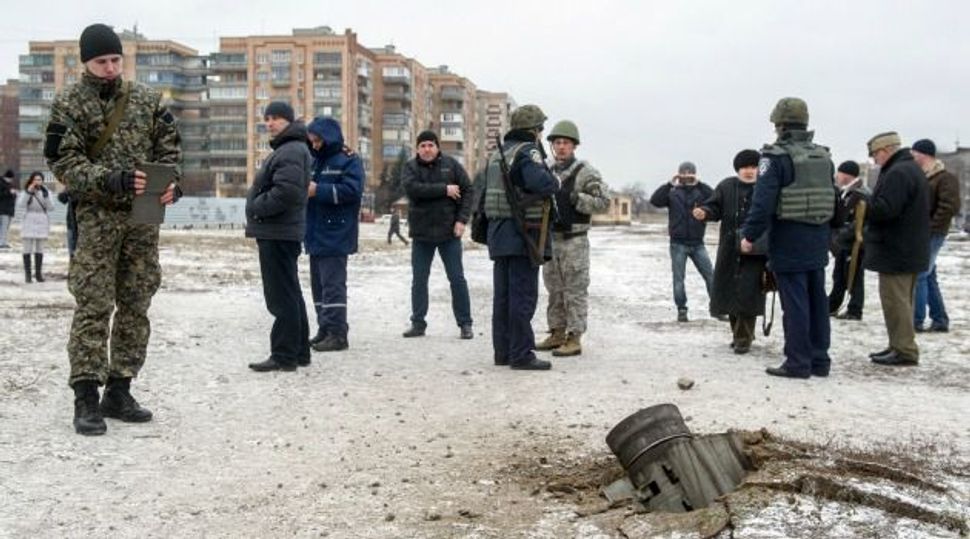 People gather around an unexploded missile in the east Ukraine town of Kramatorsk. Image by getty images

Leaders of Ukrainian Jewry reacted with cautious optimism to news that Russia and Ukraine have worked out an agreement designed to bring about a ceasefire along their border.

Yaakov Dov Bleich, a chief rabbi of Ukraine, said he was “hoping for the best while remaining prepared for the worst” following statements by Russian President Vladimir Putin Thursday morning that he and his Ukrainian counterpart, Petro Poroshenko, have worked out an agreement for ending hostilities between Ukrainian government forces and Russian-backed separatists in enclaves along the border.

According to Putin’s statement following 16 hours of talks in Minsk with Poroshenko and his delegation to peace talks in the Belorussian capital, the ceasefire would become effective Feb. 15 and entail the withdrawal of heavy weapons from the conflict areas, where 5,000 people have been killed in fighting that erupted last year.

But Bleich said that “the most effective way to end this war is to shut down the border to Russia because then all parties would come to the table and work out terms for a lasting peace,” an element absent from a ceasefire draft presented by the delegations. Bleich added that separatists, whom he called terrorists, were feeling emboldened by “the flow of arms and personnel from Russia.” As long as the border remains open, he said, conflagrations of violence are likely to reoccur.

Several attempts at reaching a negotiated ceasefire between rebels and government forces have failed in recent months. Bleich, who is a harsh critic of Russia’s actions in Ukraine, also warned against “trying to appease those terrorists, because this has been proven to be a failed strategy.”

Vadim Rabinovich, a Jewish Ukrainian lawmaker, who chairs the Ukrainian parliament’s subcommittee on human rights and founded the All-Ukrainian Jewish Congress, struck a more optimistic note Thursday. In a Facebook post about the agreement, he wrote: “I spoke with the guys in Minsk. People, there is hope for the world. Today, the main thing is to stop the war.”