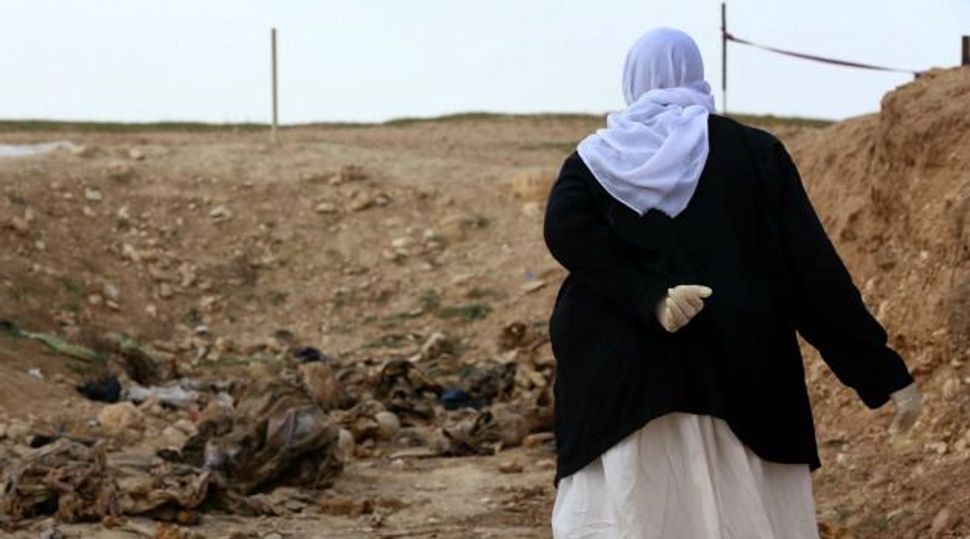 A woman from Iraq’s Yazidi minority walks through an area strewn with bones of suspected victims of Islamic State massacres. Image by getty images

Islamic State said on Thursday it was holding an Israeli Arab who had posed as a foreign fighter in order to spy for Mossad, an account denied by Israel and by the man’s family, who said he had been kidnapped.

In an interview published by Islamic State’s online English-language magazine Dabiq, Muhammad Musallam, 19, said he had joined the insurgent group in Syria so as to report to the Israelis on its weapons caches, bases and Palestinian recruits.

After his conduct aroused the suspicion of Islamic State commanders, Musallam was quoted as saying, he broke cover by phoning his father in East Jerusalem, leading to his capture.

“I say to all those who want to spy on the Islamic State, don’t think that you’re so smart and that you can deceive the Islamic State. You won’t succeed at all,” he said, according to Dabiq.

Musallam’s father, Said, denied his son was a spy, saying he went missing after traveling as a tourist to Turkey. Muhammad then phoned home, saying he had been abducted to neighboring Syria but could buy his way out, his father said.

“He said, ‘Dad, I need $200 or $300 so they will let me go,’” Said Musallam told Reuters. Before he could send the money, he said, another man phoned to inform him Muhammad had escaped his captors but had been seized by Islamic State.

An Israeli security official said Musallam traveled to Turkey on Oct. 24 in order to fight for Islamic State in Syria.

“He went on his own initiative, without his family’s knowledge,” the official told Reuters. Asked whether his statement constituted a denial that Musallam was an Israeli spy, the official said: “You can understand it that way, yes.”

Worried that members of its 20-percent Arab minority might travel to Syria or Iraq to join Islamist insurgent groups and then return radicalized and battle-ready, Israel has stepped up monitoring and prosecution of suspected would-be volunteers.

Turkey draws many Israeli Arab holidaymakers. It is also a major conduit for foreigners who slip across the border to help insurgents trying to topple Syrian President Bashar al-Assad.

Muhammad Musallam worked as an Israeli firefighter, his family said. A friend of his who spoke to Reuters on condition of anonymity said Musallam had posted pro-Islamic State messages on social media. Reuters could find no social media accounts under Musallam’s name.

In the first conviction of its kind, Israel in November jailed Ahmed Shurbaji, an Arab citizen who returned voluntarily after spending three months with Islamic State in Syria.

He received a relatively light term of 22 months in return for cooperation with security services that would likely “help the State of Israel defend itself against this organization in various ways,” the court said, in a possible allusion to information he provided about Islamic State.

Shurbaji had phoned an Israeli security official from Syria to broker a deal. The Shin Bet source said such communications with Israeli Arabs who wanted to return from Syria had sometimes been handled by Ayoob Kara, an Israeli Druse politician and former army officer close to Prime Minister Benjamin Netanyahu.

Contacted by Reuters, Kara said he was aware of Musallam’s case and did not believe he was a Mossad spy.

While declining to discuss Musallam in detail, Kara said he knew of several young Israeli Arabs who had gone to Syria to aid refugees or for the thrill of available women or booty, only to be kidnapped and exploited by insurgents like Islamic State.