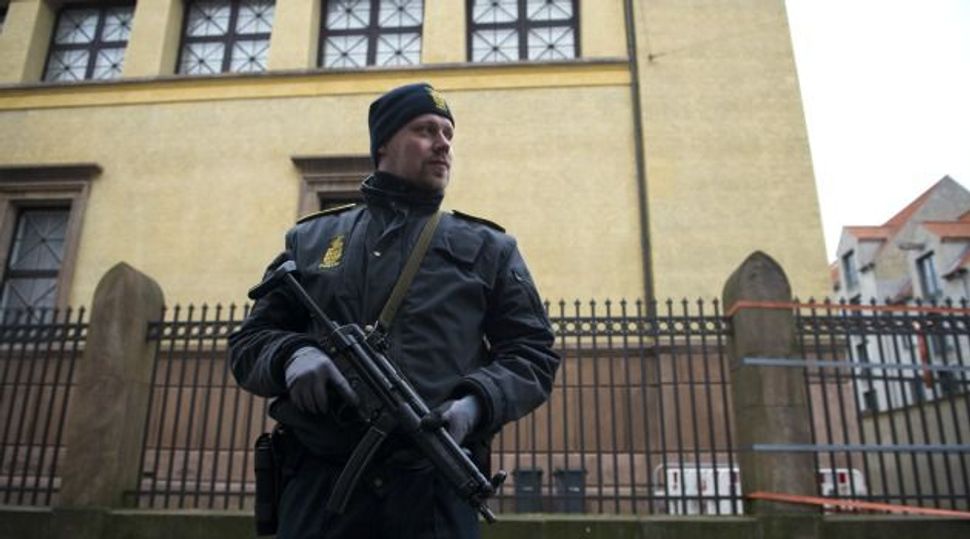 Aftermath: A police officer stands guard outside the synagogue Krystalgade in Copenhagen. Image by Getty Images

The volunteer guard killed outside Copenhagen’s synagogue was identified as Dan Uzan, 37.

Uzan, whose father is Israeli and whose mother is Danish, died Saturday night shortly after sustaining fatal gunshot injuries, the Jewish Community in Copenhagen wrote in statement published on the website of the Security and Crisis Center by the European Jewish Congress.

The shooting at the Danish capital’s central synagogue in Krystalgade occurred just hours after a fatal shooting Saturday afternoon at a free speech event at a cultural center featuring a Danish cartoonist, Lars Vilks, who is under police protection because of his cartoons caricaturing Mohammed.

On Sunday morning, Danish police killed a man during a shootout they suspected of being involved in the attacks. He began shooting after he was approached in Copenhagen’s Norrebro district by police, who had been following him for weeks and wanted to detain him in connection with the shootings.

Uzan was standing guard outside the synagogue, which was closed at the time of the attack, because of an event held at an adjacent building for approximately 80 people, who had gathered there to celebrate a family event, reportedly a bat mitzvah.

The statement, titled “Terror at Copenhagen Synagogue,” also said that two police officers were attacked during the same incident by the perpetrator or perpetrators, who were not apprehended or immediately identified. The officers are in stable condition, the report said.