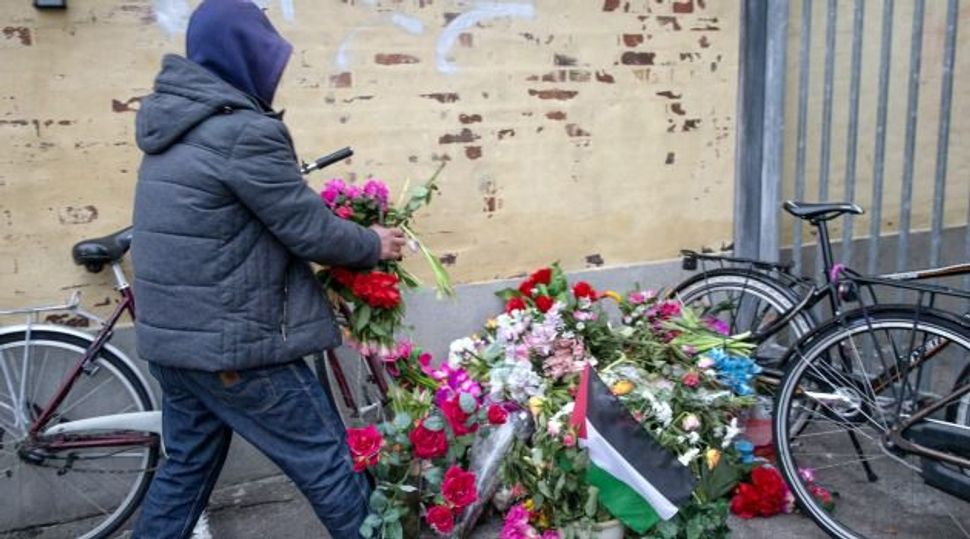 Underbelly: Copenhagen passerby removes flowers left along with a Palestinian flag at the scene where a terrorist gunman was shot and killed by police. Image by getty images

(Reuters) — Every Dane knows of Norrebro, the Copenhagen neighborhood where police shot dead the gunman suspected of carrying out attacks on a synagogue and a free speech event that shocked the country.

Blighted by protests and gang warfare, the area is a cauldron of cultures and ethnicities in sharp contrast to more homogenous regions of Copenhagen and has suffered from a bad, some residents would say overblown, reputation.

The suspect, named by media on Sunday as Omar Abdel Hamid El-Hussein, was shot right by the Norrebro train station on the corner of a busy intersection marked by brightly lit shawarma grilled meat cafes, currency exchanges and other shops.

It is an area of contrasts – red-brick housing estates stand next to 100-year-old tenement buildings and a green strip of parks, sports pitches and bicycle lanes runs through its heart. A busy Christian community center is streets away from Denmark’s first purpose-built mosque, opened just last summer.

Residents piled up flowers outside the synagogue where one of the two people killed in the attacks was shot and the site was visited by Prime Minister Helle Thorning-Schmidt, who called the shootings a terrorist attack. 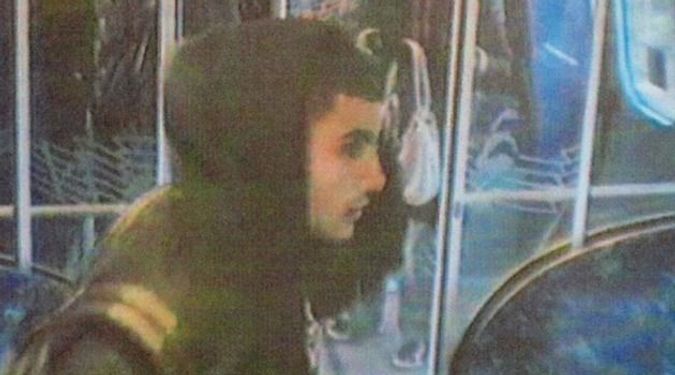 In Norrebro however, there was a sense of a community under siege – the media descended on the place where the suspect was killed in a shootout with police and residents passed by quickly, avoiding the cameras. Many declined to speak – women in hijabs or niqabs walked around the film crews.

“I think what we have here is so stupid. We have one person killing two other people. Of course it’s bad. But next time I pass by here, it’s not going to mean anything to me,” said 24-year-old Heider, a media student, rejecting religious links to the attack.

“The thing is how much attention has the media paid to this? What about the events in Nigeria a couple of months ago when 500 died – no one heard a thing,” he said. When asked about his roots, he shoots back: “I’m Danish!”.

‘I’M NOT A TERRORIST’

Residents of Norrebro appeared resigned to the media onslaught, which they say will tarnish the neighborhood’s reputation further after the area was known for protests against housing policies in what used to be a squalid workers’ area.

In the 1970s, squatters took over buildings, the hippy movement flourished and from the 1980s onwards an influx of refugees came from conflicts in Iran and Iraq, Pakistan, Morocco and Yugoslavia. Now over a quarter of Norrebro’s residents are immigrants or children of immigrants.

Gang fought gang, in turf warfare particularly between the Hell’s Angels and new immigrant groups. Gunfire in Norrebro was not unusual, although residents say that is now a thing of the past.

But while the area appears run down, there is a clear sense of community and a pride in its tumultuous history. A Norrebro local committee member, Mogens Petersen, smiles and shrugs as he recounts decades of protests and years of shootings. 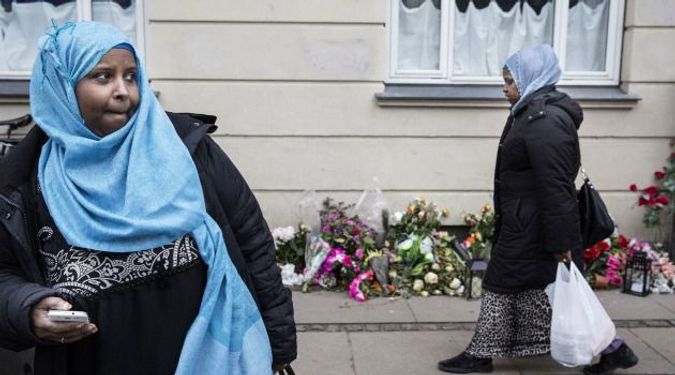 “We haven’t been polarized yet. I think that could happen out where there aren’t any foreigners. When you live together, you’re not so afraid of each other,” he said.

“There’s lunatics all over but it’s not my neighbor, it’s not where I buy my vegetables,” he said.

The suspect shooter was known to police precisely because of his connections to gangs. El-Hussein was convicted two months ago of a violent assault against a commuter on a train in 2013.

Local media said he was the son of Palestinian immigrants who argued aggressively about the Israel-Palestinian conflict, had a short fuse, but had not shown signs of radicalisation that could lead to an attack.

While most residents preferred to say nothing, an articulate 16-year-old student, who did not wish to give his name but who had moved here as a child from the Middle East, spoke of his anger at the events.

“Those who come out and shoot people, just because of some stupid cartoons, I am completely against. The prophet, praise be upon him, has been drawn for hundreds of years,” he said.

“Those extremist should be isolated. They are just making a bad image for Muslims. I am not that image that the whole media wants to show, that I am a bad man, that I want to fight every one, that I am a terrorist.”