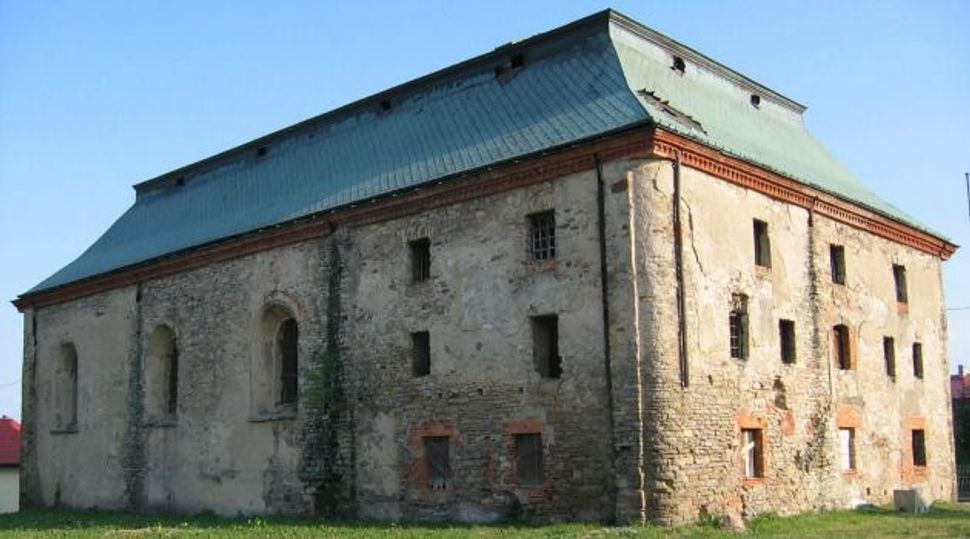 The Polish Ministry of Culture and National Heritage has turned down a request to support the renovation of a historic synagogue in Przysucha in southern Poland.

The titleholder of the synagogue, the Foundation for the Preservation of Jewish Heritage in Poland, has rejected the decision, and is working to convince federal officials to change their minds.

Between 2012 and 2014, the Foundation obtained from the Ministry of Culture financial assistance that allowed it to perform necessary rescue work on the Przysucha synagogue, including securing the foundation and roof restoration to protect the synagogue from building catastrophe. The synagogue’s poor condition is the result of of post-World War II decades of neglect.

The total estimated cost to renovate the synagogue is $52,000. The Foundation requested $43,000 from the Ministry of Culture.

The synagogue in Przysucha is a monument to late Baroque architecture, the only such facility in the Mazovia region and one of the most important in Poland. At the end of the 18th century, Przysucha was one of the most important centers of Hasidism in Poland. Among the famous rabbis that lived in the town were: Jacob Isaac Ben Asher (1766-1813), known as the holy Jew of Przysucha; and his student, Symcha Bunem (1784-1827), a teacher of the first tzaddik of Ger, Yitzhak Mair Rothenburg Alter. After World War II, the building was used as a stables and to store fertilizers. The synagogue was returned to the Jewish community in the beginning of this century.

The Foundation for the Preservation of Jewish Heritage in Poland began revitalizing the synagogue with support of the World Monuments Fund, the Taube Foundation for Jewish Life and Culture, and the Cahnman Foundation.

“We do not understand why it is not in the interest of the Polish state to assist in caring for Jewish monuments,” Monika Krawczyk, director general of Foundation told JTA. “It seems that, when fully exploited, squeezed like lemon, it was given back to the Polish Jewish community: ‘You wanted it, now you have it.’”

Krawczyk continued: “And now the worst are those assurances coming from high public officials that they care about the historical Jewish heritage. In fact, a pat on the back is free. Przysucha Synagogue after restoration will be a beautiful monument of the Golden Age of Polish Jews. Now it is a testament to more or less successful attempts at equal treatment.”