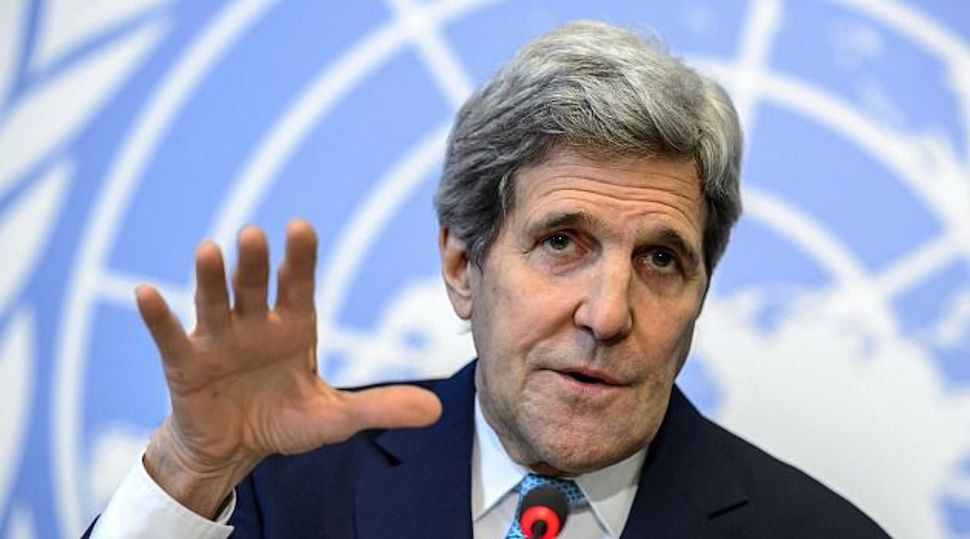 Simply demanding Iran’s capitulation is no way to get a nuclear deal with the Islamic Republic, U.S. Secretary of State John Kerry said on Wednesday as he wrapped up three days of talks with a veiled dig at Israeli Prime Minister Benjamin Netanyahu.

Kerry said he and Iranian counterpart Mohammad Jawad Zarif made some progress in their negotiations in the Swiss lakeside town of Montreux and would resume them on March 15. Kerry aides said many obstacles remained before a late March deadline for an outline accord between Iran and six world powers.

“There are still significant gaps and important choices that need to be made,” Kerry told reporters after more than 10 hours of talks all told with Zarif.

On Tuesday, Netanyahu said in a speech in the U.S. Congress that Washington was negotiating a bad deal with Iran that could spark a “nuclear nightmare,” drawing a rebuke from President Barack Obama and exposing a deepening U.S.-Israeli rift.

Kerry said politics and external factors would not distract from the talks, which aim to constrain Iran with intrusive U.N. access and verification of its nuclear activity and lengthen the “break-out” time needed for it to build any nuclear weapon.

“No one has presented a more viable, lasting alternative for how you actually prevent Iran from getting a nuclear weapon. So folks, simply demanding that Iran capitulate is not a plan. And nor would any of our P5+1 partners support us in that position.”

The other P5+1 countries are Russia, China, France, Britain and Germany, who would all have to sign off on any deal.

Netanyahu has called for the powers to insist Iran dismantle its nuclear infrastructure and change what he described as its “aggressive” regional posture – an idea swiftly rejected by the Obama administration as tantamount to seeking “regime change” in Tehran. Israel and Iran have been arch-enemies since 1979.

Iranian President Hassan Rouhani, elected in 2013 on a platform of easing Iran’s isolation abroad through diplomacy and a removal of sanctions imposed on it, said Tehran was prepared to accept greater nuclear scrutiny as part of a deal.

“If the basis of these negotiations is for increased transparency, we will accept greater transparency,” he said in a statement. “But if the negotiations are trying to prevent the people of Iran from (enjoying) their inalienable right, in other words advancement in science and technology, it is very natural that Iran will not accept such an understanding or agreement.”

Kerry also sought to address the concerns of Arab nations who fear that a nuclear deal may simply leave Iran with more cash and energy to pursue its regional agenda, including supporting Shi’ite Muslim groups in Yemen, Syria and Lebanon’s political and militant movement Hezbollah.

“For all the objections that any country has to Iranian activities in the region, and believe me, we have objections and others in the world have objections, the first step is to prevent Iran from acquiring a nuclear weapon,” Kerry said.

Asked if he thought they had made progress, Zarif told reporters: “We have, but a lot of work remains.”

The six powers’ foreign ministry political directors will meet Iranian negotiators in Switzerland on Thursday ahead if the next round between the two pivotal players, Kerry and Zarif.

Kerry will fly to Riyadh later on Wednesday and plans to meet the foreign ministers of Britain, France and Germany in Paris on Saturday, a senior U.S. State Department official said.

Netanyahu’s speech to Congress, in which he blasted the current diplomatic approach to resolving the dispute, may make it harder for the Obama administration to sell the potential deal back home.

Netanyahu argued that rather than preventing Iran from acquiring nuclear arms, a deal would “all but guarantee” that it would one day get the atomic bomb, putting Israel, the wider region and U.S. interests at risk.

Obama responded within hours saying Netanyahu had offered no “viable alternatives” to the current course of negotiations.

Netanyahu responded on arrival back in Israel on Wednesday by saying he had offered a “practical alternative” with his proposals for the powers’ negotiating approach.

Iran and world powers are trying to put a framework agreement in place by the end of the month, despite the misgivings of Israel, U.S. congressional Republicans and some Gulf Arab states. Such an accord would be followed by a comprehensive agreement to be completed by the end of June.

The aim of the negotiations is to persuade Iran to restrain its nuclear program in exchange for relief from sanctions that have crippled the major oil exporter’s economy. Iran wants sanctions scrapped swiftly, the powers only in phases.

The United States and some of its allies, notably Israel, suspect Iran of using its civil nuclear program as a cover to develop a nuclear weapons capability. Iran denies this, saying it is for peaceful purposes such as generating electricity.