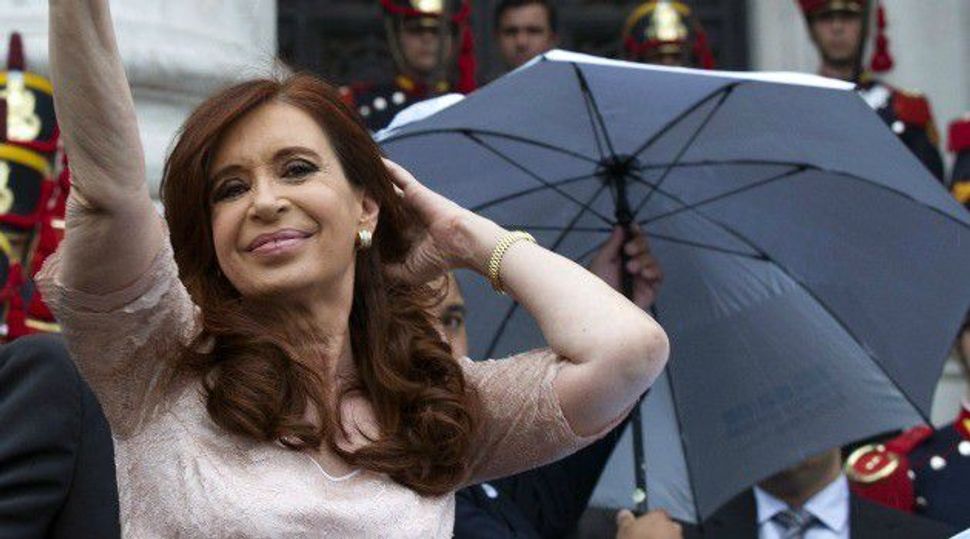 Argentina’s president called the deadly attack on the AMIA Jewish community center in 1994 and the attack on the Israeli Embassy in 1992 “collateral damages in a war in which we had never been part, nor want to be.”

The comments by President Cristina Fernandez de Kirchner, published in an article on her website, were a response to the citing of the attacks by Israeli Prime Minister Benjamin Netanyahu in his speech Tuesday to the U.S. Congress as examples of Iran exporting its terrorism overseas.

“Yesterday, March 3, Prime Minister Benjamin Netanyahu of Israel convened by the Republican Party spoke before the U.S. Congress,” Kirchner wrote. “His speech had only one goal: to prevent President Barack Obama from reaching any kind of agreement with Iran on its nuclear program.”

She noted, “The Israeli premier mentioned, among other arguments: ‘Beyond the Middle East, Iran attacks America and its allies through its global terror network. It blew up the Jewish community center and the Israeli embassy in Buenos Aires.’”

Kirchner then recalled how she and her late husband, former Argentine President Nestor Kirchner, fingered Iran for the attacks. The AMIA bombing killed 85 people and was Argentina’s deadliest terrorist attack; the bombing of Israel’s embassy in Buenos Aires left 29 dead.

She lamented what she called the politicization of the AMIA attack, saying that the AMIA case has become “a chess game of international geopolitics and national policy.”

She wrote, “Dates, facts and strategies that have nothing to do with the justice deserved by the 85 victims of the AMIA, their families and our country. For some, Argentina and AMIA are just collateral damage in a war that never went anywhere.”