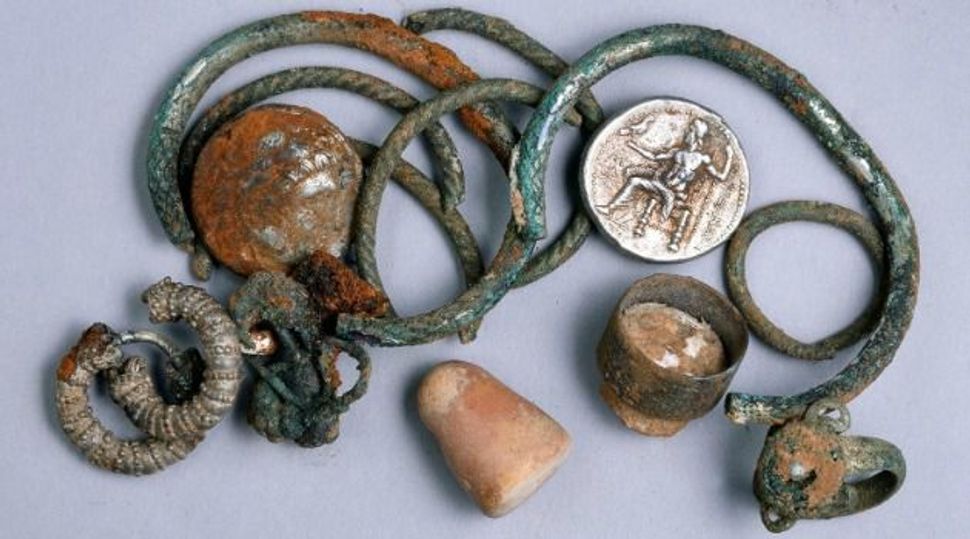 A cache of rare 2,300-year-old gold coins and silver and bronze objects were discovered in a cave in northern Israel.

The treasure trove was discovered by members of the Israeli Caving Club, who visited the large and well-hidden stalactite cave in preparation for a club visit, according to the Israel Antiquities Authority.

“The reporting of the treasure by honest citizens will contribute to our understanding of the history of the Land of Israel,” Amir Ganor, director of the IAA Unit for the Prevention of Antiquities Theft, said in a statement.

The discovery, announced on Monday, was made about two weeks ago. The location of the cave is being kept secret.

The spelunkers had explored the cave for several hours before happening on the treasure. The first discovery was two ancient silver coins that had been minted during the reign of Alexander the Great, who conquered the Land of Israel at the beginning of the Hellenistic period, or the late fourth century BCE. Several pieces of silver jewelry were found alongside the coins, among them rings, bracelets and earrings, which apparently were concealed in the cave inside a cloth pouch.

According to the IAA, the valuables may have been hidden in the cave by local residents who fled there during the period of government unrest following the death of Alexander, when the Wars of the Diadochi broke out in Israel between Alexander’s heirs.

“Presumably the cache was hidden in the hope of better days, but today we know that whoever buried the treasure never returned to collect it,” the IAA statement said.

Ancient pottery vessels also were discovered in the cave; in some cases stalagmites had developed on the vessels. Some artifacts in the cave are up to 6,000 years, according to the IAA.

It was the second important discovery in recent weeks. Last month, civilian divers discovered a treasure of gold coins off the coast of Caesarea.