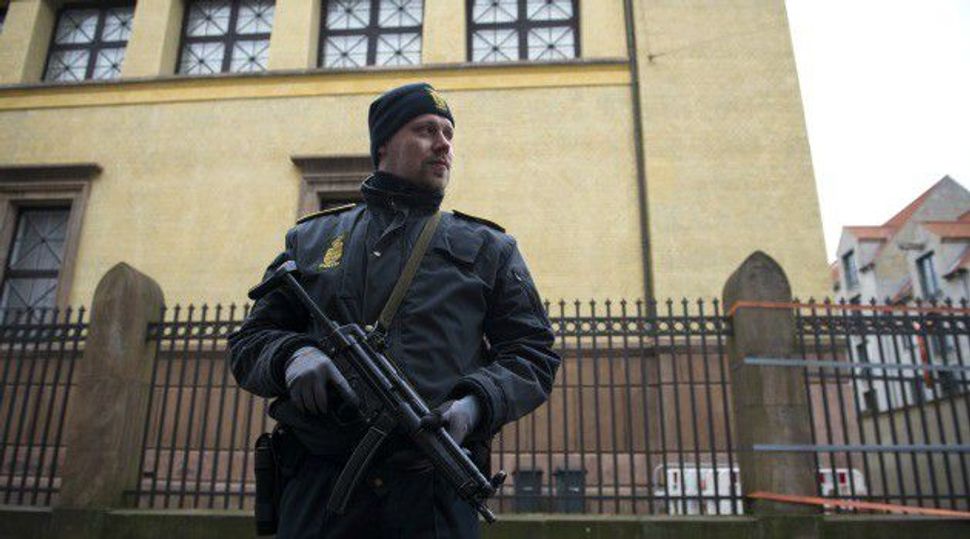 A police officer stands guard outside the Krystalgade synagogue in Copenhagen. Image by Getty Images

Jewish communities in Europe are “being bankrupted” by the need to provide security for their institutions, the U.S. special envoy on anti-Semitism said.

“Every Jewish community in Western Europe certainly needs security support,” said Ira Forman, the State Department’s special envoy to monitor and combat anti-Semitism, said Friday in Stockholm, the French news agency AFP reported. “Many of them are being bankrupted by the money they have to spend to protect their institutions.

“If current trends continue, and they’re not good … we have to worry about small Jewish communities in Europe and their very viability.”

Last week, Forman launched a tour of western Europe to meet with Jewish leaders, nongovernmental organizations and government officials. From Stockholm he traveled to Malmo, a Swedish city that has been hit with a number of hate crimes against Jews.

From Tuesday to Thursday he is scheduled to visit Copenhagen, where a volunteer Jewish security guard was shot and killed last month outside a synagogue by a lone Islamist gunman.

Along with the synagogue shooting, Jewish sites in Europe have been the target of other recent high-profile attacks, including the Hyper Cacher kosher supermarket in Paris and the Jewish Museum of Belgium in Brussels, causing unease in the continent’s Jewish communities.