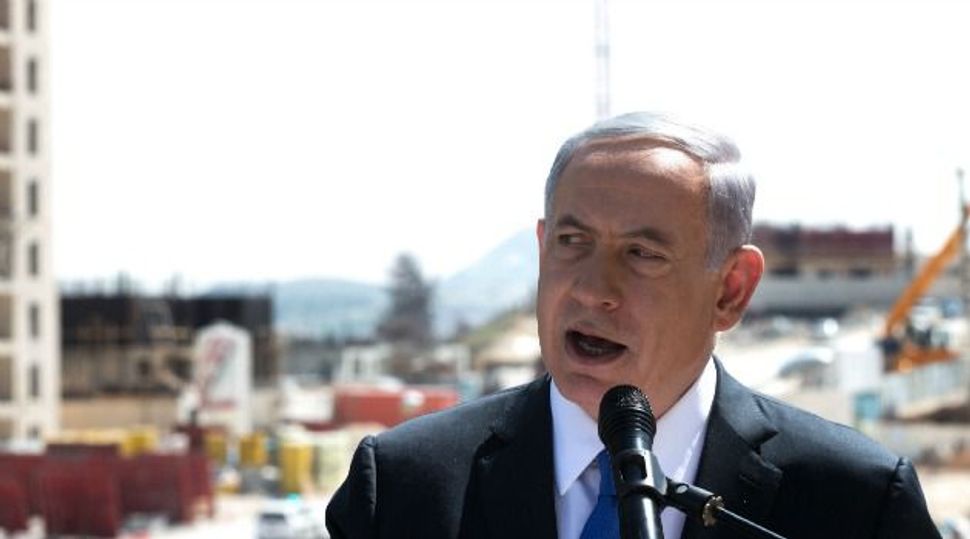 (Reuters) — Israel’s Prime Minister Benjamin Netanyahu, in a final bid to shore up right-wing support ahead of a knife-edge vote on Tuesday, said he would not permit a Palestinian state to be created under his watch if he is re-elected.

Trailing his center-left opponent Isaac Herzog in opinion polls, the three-term leader has sought to shift the focus away from socioeconomic issues and on to security challenges, saying he alone can defend Israel.

Having previously hinted that he would accept a Palestinian state, Netanyahu reversed course on Monday, citing risks that he linked to the regional spread of Islamist militancy. He said that if he is re-elected, the Palestinians would not get the independent state they seek in the occupied West Bank, East Jerusalem and Gaza.

“Whoever moves to establish a Palestinian state or intends to withdraw from territory is simply yielding territory for radical Islamic terrorist attacks against Israel,” he told the Israeli news site NRG.

Asked if that meant a state would not be established if he remained prime minister, he said: “Indeed.”

Herzog and Livni have accused Netanyahu of playing up fears over the Palestinians and Iran’s nuclear program to distract voters from the high cost of living and other social issues, which according to surveys are Israelis’ principal concerns.

No single party has ever won an outright majority in the legislature, making coalitions the norm. Israel’s president picks the political leader whom he believes has the best chance of forming a coalition to have a go first.

In that respect, Netanyahu’s pledge, coupled with his visit to a prominent West Bank settlement earlier on Monday where he promised to go on building on occupied land, appeared designed to draw as much of the right-wing vote as possible.

That may succeed in closing the four-seat gap that the center-left has over his Likud party going into the vote, increasing the possibility that President Reuven Rivlin will choose him to try to form a coalition first, not the opposition.

If he is reelected, he would be on track to become Israel’s longest-serving prime minister.

Polls predict that the Herzog-Livni list, the Zionist Union, will take 24 to 26 seats in the 120-member parliament, compared with 20 to 22 for Netanyahu’s Likud. That has prompted the prime minister to appeal to conservative Israelis not to endanger the cause by voting for other right-wing parties.

“The choice is symbolic: the Likud led by me, that will continue to stand firmly for (Israel’s) vital interests, compared with a left-wing government … ready to accept any dictate.”

Netanyahu promoted the establishment of Har Homa in 1997, in defiance of deep-seated international opposition, after he was first elected prime minister.

The settlement is on a hilltop in a part of the occupied West Bank that Israel annexed, along with nearby East Jerusalem, after the 1967 Middle East war. Palestinians, who call the site Jabal Abu Ghneim, have long viewed Har Homa’s construction as an attempt to tighten Israeli control around the holy city.

“I thought we had to protect the southern gateway to Jerusalem by building here,” Netanyahu said, with a construction site behind the podium as his backdrop. “There was huge objection, because this neighborhood is in a location which prevents the Palestinian (territorial) contiguity.”

Avraham Diskin, a political scientist at Jerusalem’s Hebrew University, said opinion polls showed the right-wing and left-wing blocs were both short of a governing majority.

“In all previous elections there were considerable differences between predictions and results,” Diskin said, estimating that 10-20 percent of voters were undecided.

With some 70 percent of the electorate usually remaining loyal either to left- or right-wing parties, “it’s enough for three to five percent to move from one bloc to another to … get a dramatic change in the future government of Israel,” Diskin said.