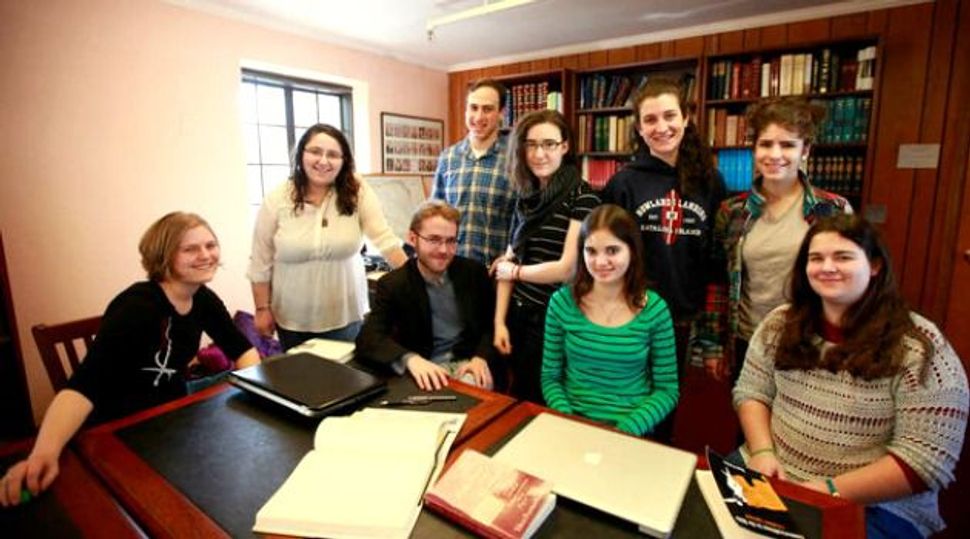 The rebellion against Hillel International led by a growing batch of student dissenters operating under the banner of Open Hillel may be morphing into an official schism.

The Hillel chapter at Swarthmore College, a liberal arts college in Pennsylvania sometimes grouped among the “Little Ivies,” announced yesterday that it would no longer use the name Hillel, in response to a letter from the parent organization threatening legal action for violation of the Hillel trademark.

Swarthmore Hillel became the first Hillel chapter to declare itself an Open Hillel in December 2013, later followed by the Vassar and Wesleyan Hillels.

At issue is the Open Hillel policy of welcoming speakers and sponsorships from across the political spectrum on Israel and Zionism, a practice that directly thwarts Hillel’s official Standards of Partnership, which ban Hillel chapters from hosting speakers who are “anti-Zionist” or support BDS (Boycott, Divestment, and Sanctions) against Israel.

Following the letter, Swarthmore Hillel President Sarah Revesz released a statement announcing that due to Hillel’s “ultimatums and legal threats,” the Swarthmore Hillel “can only continue to serve the diverse needs of our community under a different name than Hillel.”

The decision of the Swarthmore chapter to disaffiliate from Hillel International is a blow to the Open Hillel activists, who see themselves as part of the Hillel community and advocate for internal change rather than fracturing and schism.

In the letter to Swarthmore College, Turoff stated that Open Hillel is “a campaign with the known purpose of promoting an anti-Israel and BDS (Boycott, Divestment and Sanctions against Israel) agenda.” Open Hillel explicitly denies this, claiming on its website that their “goal is not to support any one political position but to encourage an atmosphere in which a plurality of political views can be openly expressed, discussed, and debated.”

Does this mean that an Open Hillel chapter would hold anti-BDS events as well?

“We don’t have any specifically anti-BDS events,” said Joshua Wolfsun, the Israel-Palestine Programming Coordinator for (what was formerly known as) Swarthmore Hillel. However, Wolfsun chalked that up to technicalities, noting that such an event does not fit their “social justice” scheduling plan. “It’s not outside the realm of possibility,” he said, adding that “the majority of the [Swarthmore Hillel] board is definitely not” pro-BDS.

As for the upcoming Civil Rights Vets event, Wolfsun explained: “We’re not holding them up as the sole arbiters of truth and rightness. The students don’t have to just automatically agree — in fact we’d prefer if they don’t.”

“We are closely following the story, and will release a statement once we have more information,” said Aryeh Younger, press coordinator of Open Hillel.

Hillel International did not immediately respond to a request for comment.