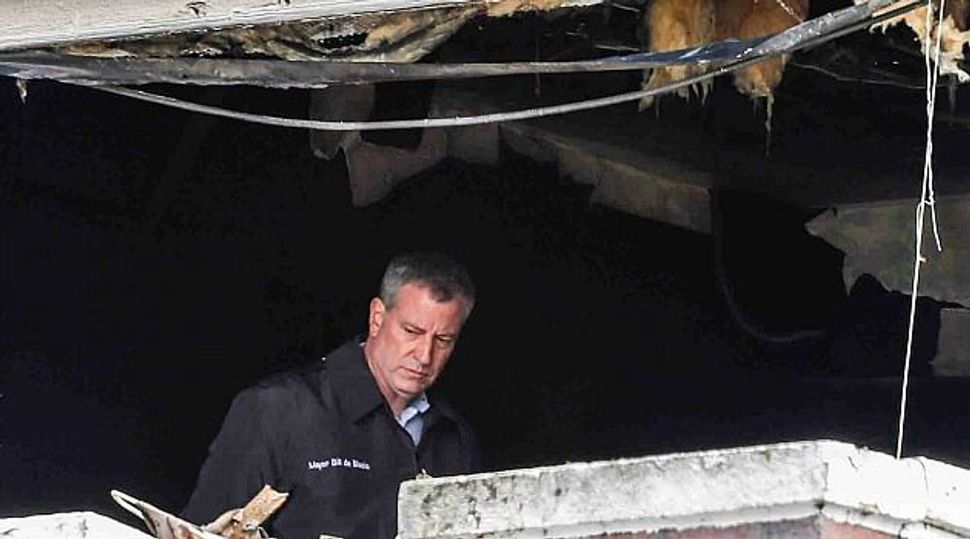 Seven children from an Orthodox Jewish family died early on Saturday when flames ripped through their Brooklyn home in one of New York City’s deadliest fires in years, officials said.

Their 45-year-old mother and a teenage sister survived after jumping from an upper floor. The two were taken to a local hospital and were in critical condition, New York Fire Department spokesman Michael Parrella said.

The blaze erupted in the single-family dwelling around 12:30 a.m. (0430 GMT). It apparently was started accidentally by a hot plate, used by many Orthodox families to warm food on the Sabbath, said Fire Commissioner Daniel Nigro.

It was the highest death toll in a fire in the city in seven years, Nigro said.

“This is an unbelievable tragedy,” New York Mayor Bill de Blasio told reporters after seeing the devastation at the site of the blaze. “Every New Yorker is feeling this pain right now.”

“You can literally see what was a home for a large and strong family and now it is wiped out, every room empty and burned,” he said.

De Blasio asked for the surrounding community to support the family’s grieving father, who was apparently away for a conference overnight.

The Associated Press reported that the children’s father, Gabi, who was away from home at a Shabbat conference when the tragedy occurred, and only learned of it on Saturday night, is still in shock. The mother Gayle Sassoon, and their 14-year-old daughter, remain in critical condition and are on respirators and do not know of the deaths of the other family members, according to the AP.

The Jewish Press cited an unnamed community rabbi as saying the children would be buried in Israel.

A memorial service is set to be held in New York on Sunday, according to Ynet, and then the bodies will be buried in Israel the following day.

“The horrific tragedy that struck the Sassoon family has left all of us deeply shocked and saddened,” Assemblyman Dov Hikind (D-Brooklyn), who represents the district that the family lives in, said in a statement. He urged his constituents to check that their smoke detectors are working and to check the safety of their hot plates. “Our community is reeling from this unspeakable catastrophe. Our prayers are with the Sassoon family and we will continue to pray for the speedy recovery of the survivors.”

Responding to reports of flames inside the home, firefighters forced their way in and extinguished the fire, which had started in the kitchen, Nigro said. They then found the children, aged 5 to 16, in their bedrooms near the back of the home, he said, after the mother and another daughter jumped.

More than 100 firefighters turned out to battle the blaze and brought it under control within an hour, Parrella said.

Midwood has a large population of Orthodox Jewish residents. Nigro said the hot plate was likely left switched on because of religious restrictions on lighting fires during the Jewish Sabbath, which begins at sundown on Friday.