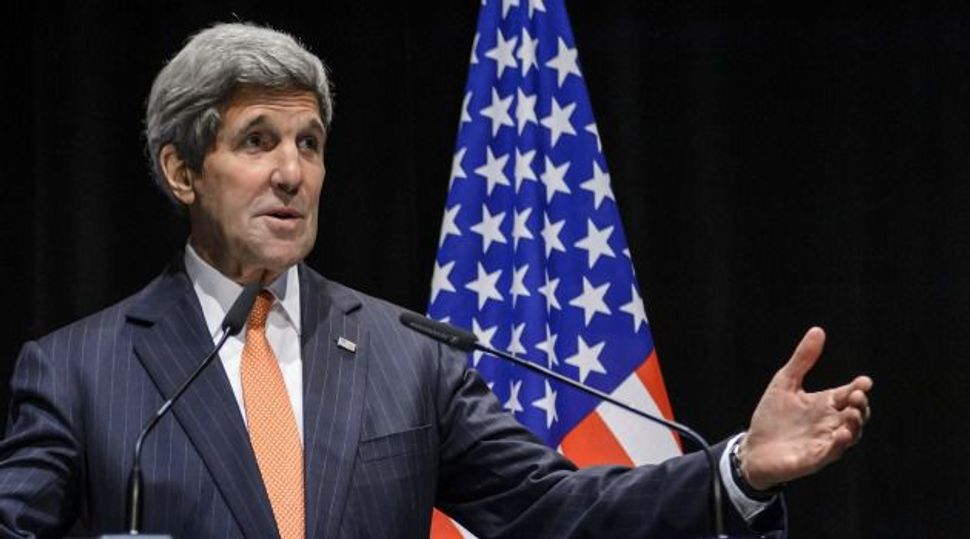 John Kerry delivers a statement about the recently concluded round of negotiations with Iran over their nuclear program. Image by Getty Images

Israeli officials denied a report that Israel spied on closed-door talks held between the United States and Iran over the latter’s nuclear program.

Israel provided the inside information to Republican members of Congress in order to turn them against the deal, The Wall Street Journal reported on Monday night in a story that appeared the next day in the newspaper’s print edition. The story cited anonymous “current and former U.S. officials.”

“It is one thing for the U.S. and Israel to spy on each other. It is another thing for Israel to steal U.S. secrets and play them back to U.S. legislators to undermine U.S. diplomacy,” a senior U.S. official told the newspaper, indicating that it was not so much the alleged spying that angered the White House but the meddling in its relations with Congress.

The White House discovered that Israel was collecting information when U.S. intelligence agencies spying on Israel intercepted communications among Israeli officials that included details of the confidential talks, U.S. officials told the newspaper.

Among the pieces of classified information collected by Israel was the number of centrifuges that Iran could keep operating as part of the final deal.

Israeli officials told The Wall Street Journal that the country’s intelligence services did not spy directly on the American negotiators, but rather that they found the information through surveillance of Iran and other world powers involved in the negotiations, as well as from some of the world powers themselves.

“Of course, Israel has various security interests, and it is clear that we have good intelligence services. But we don’t spy on the United States,” he said. Liberman indicated that Israel may have spied on Iran or other negotiating partners.