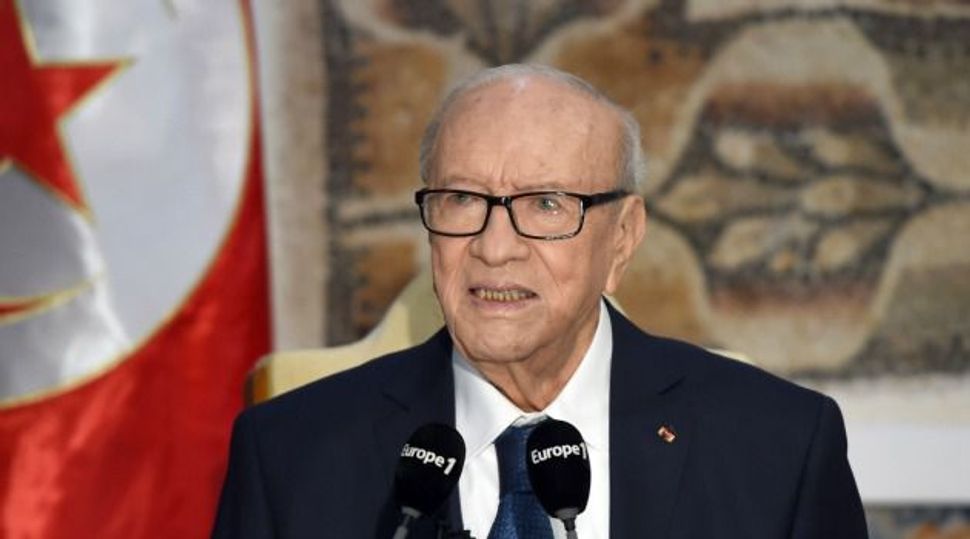 In the wake of the desecration of a Jewish sage’s grave, Tunisian President Beji Caid Essebsi promised a European rabbinical body he would protect his country’s Jews.

Essebsi, who won the country’s presidential election last year, made the pledge this week during a meeting with Rabbi Moche Lewin, who was in the country as a delegate of the European Conference of Rabbis.

“I will not return Tunisia to the days of dictatorial rule but will firmly protect all citizens and the Jewish community and its institutions,” Essebsi told Lewin, who was part of a delegation of foreign faith leaders and dignitaries attending a rally commemorating the death last week of 22 people, many of them tourists, in an attack by Islamists in Tunisia.

Essebsi was quoted in a statement released Thursday by the Conference of European Rabbis.

During his visit, Lewin visited Tunisia’s old Jewish cemetery where unknown individuals earlier this month smashed the headstone of the grave of Rabbi Masseoud Elfassi, an 18th century sage.

Tunisian Tourism Minister Amel Karboul told Lewin that security around the cemetery and other Jewish sites was beefed up following the attack. Quoting Jewish community representatives, the news site assabahnews.tn reported the incident may have been the work of grave robbers.

Karboul also announced plans to restore the old synagogue of Tunis, the country’s capital city, and to observe the annual pilgrimage of Jews to the island of Djerba ahead of Passover.

Also joining the delegation commemorating last week’s deadly attack was Avishai Hattab, the brother of Yoav Hattab, a Tunisian Jew whom an Islamist killed on Jan. 9 along with three other Jews during an attack on a Kosher supermarket near Paris.