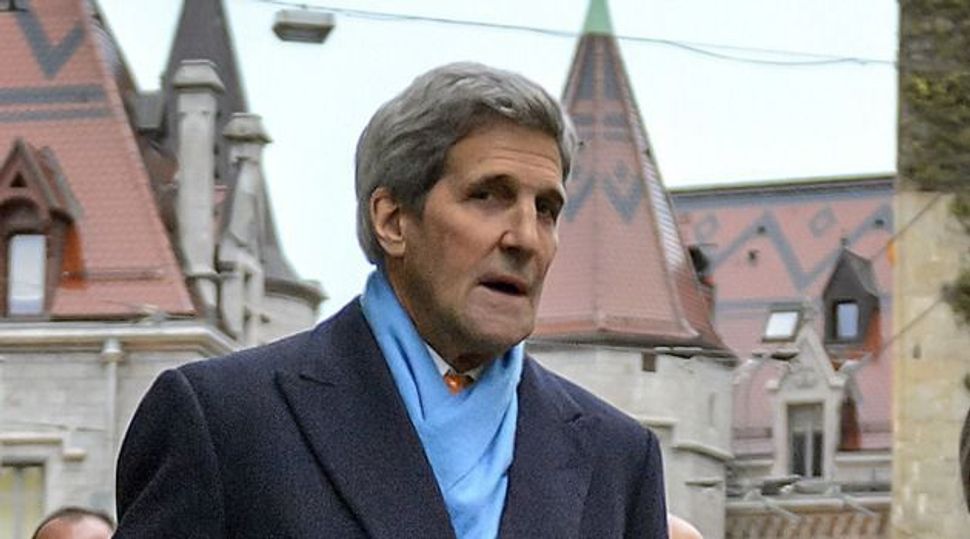 Iran and major powers are close to agreeing a two- or three-page accord with specific numbers as the basis of a resolution of a 12-year standoff over Tehran’s nuclear ambitions, officials have told Reuters.

As the French and German foreign ministers arrived in Switzerland on Saturday to join talks between U.S. Secretary of State John Kerry and Iranian Foreign Minister Mohammad Javad Zarif, Western and Iranian officials familiar with the negotiations cautioned that they could still fail.

Kerry and Zarif have been in Lausanne for days to try to reach an outline agreement by a self-imposed deadline of March 31 between Iran on the one hand and the United States, Britain, France, Germany, Russia and China on the other.

“The sides are very, very close to the final step and it could be signed or agreed and announced verbally,” a senior Iranian official familiar with the talks told Reuters on condition of anonymity. Other officials echoed the remarks while warning that several crucial issues were still being hotly debated.

French Foreign Minister Laurent Fabius told reporters on arrival: “I hope we can get a robust agreement. Iran has the right to civil nuclear power, but with regard to the atomic bomb, it’s ‘no’.”

“The talks were long and difficult,” he added. “We have moved forward on certain points, but on others not enough.”

The negotiations, under way for nearly 18 months, aim to hammer out an accord under which Iran, which denies any ambition to build nuclear weapons, halts sensitive nuclear work in exchange for the lifting of sanctions, with the ultimate aim of reducing the risk of a war in the Middle East.

Ahead of another meeting with Zarif on Saturday, Kerry said he expected the discussions to run late. Zarif added that the meetings would run through “evening, night, midnight, morning.”

The British and Russian foreign ministers were due to arrive in Lausanne over the weekend, along with a senior Chinese official.

If agreed, the document would cover key numbers for a comprehensive agreement between Iran and the six powers, such as the maximum number and types of uranium enrichment centrifuges Iran could operate, the size of uranium stockpiles it could maintain, the types of atomic research and development it could undertake, and details on the lifting of international sanctions that have crippled Iran’s economy.

Two officials said it was likely that most of the outline agreement would be made public, though some said certain sections would be kept confidential.

Several Iranian officials denied that Iran was close to agreeing an outline document, but a Western diplomat who confirmed the Reuters story said the comments were aimed at a domestic audience.

One of the key numbers is expected to be the duration of the agreement, which the officials said would have to be in place for more than 10 years. Once it expired, there would probably be a period of special U.N. monitoring of Tehran’s nuclear program.

The framework accord should be followed by a comprehensive deal by June 30 that includes full technical details on the limits set for Iran’s sensitive nuclear activities.

It remains unclear whether the framework deal will be formally signed or agreed verbally. The Iranians have expressed concern that a written agreement would limit their negotiating space when the technical details are worked out.

The officials cautioned that, even if such a preliminary deal was done in the coming days, there was no guarantee that agreement would be reached on the many technical details.

Some details have been out in the open for months. An Iranian government website said in November that Washington could let Iran keep some 6,000 early-generation centrifuges, down from nearly 10,000 now in operation.

Along with the timetable for the lifting of U.N. sanctions, officials say the biggest sticking point in the talks remains centrifuge research and development. They say Iran wants to conduct advanced centrifuge research at the underground Fordow site, but the Western powers dislike the idea of Iran operating centrifuges there.

The deal would call for U.S., European Union and U.N. sanctions to be lifted according to a specific schedule, though some could be lifted very quickly, the officials said.