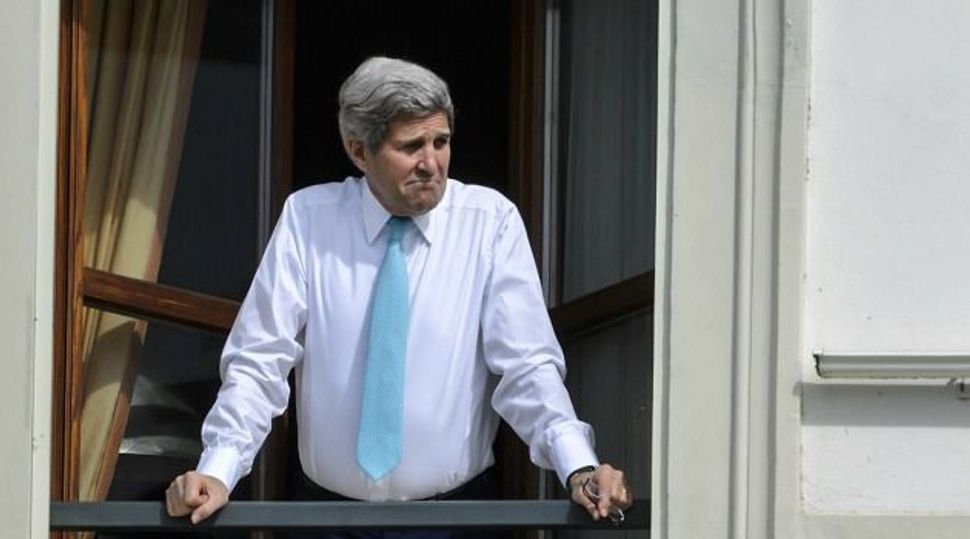 Six world powers and Iran met again on Wednesday in a bid to reach a preliminary accord on reining in Tehran’s nuclear program, after failing to agree crucial details such as the lifting of U.N. sanctions by a midnight deadline.

The negotiators ended talks in the Swiss city of Lausanne in the early morning hours. But as top negotiators from the powers met Iranian Foreign Minister Mohammad Javad Zarif, Russia and Iran expressed optimism that an initial agreement was within reach.

British Foreign Secretary Philip Hammond sounded a note of caution. “I think we have a broad framework of understanding, but there are still some key issues that have to be worked through,” he told the BBC.

“Some of them are quite detailed and technical so there is still quite a lot of work to do but we are on it now and we’ll keep going at it.”

Zarif said they were “very good talks,” though he acknowledged that there were issues to be smoothed over.

It was not clear how long the negotiations would continue.

The six powers – the United States, Britain, France, Germany, Russia and China – aim to stop Iran from gaining the capacity to develop a nuclear bomb in exchange for easing international sanctions that are crippling its economy.

A preliminary deal would be a major milestone toward a final accord, with an end-June deadline, that could end a 12-year standoff and reduce the risk of another Middle East war.

With Iran asserting its “nuclear rights” and the United States threatening on Tuesday to abandon the negotiations if the current talks yield no political framework accord, the talks have been bogged down on the issues of nuclear centrifuge research, the lifting of U.N. sanctions and their restoration if Iran breaches the agreement.

Russian Foreign Minister Sergei Lavrov, who returned to Moscow, said negotiators had reached a general accord on “all key aspects,” according to Russia’s TASS news agency.

But a diplomat close to the talks denied that such an agreement had been reached, and a French official said Foreign Minister Laurent Fabius had left the talks and would return from France when it was useful.

China warned of failure and called for compromise, urging all sides to meet each other half way.

“If the talks are stuck then all previous efforts to resolve Iran’s nuclear standoff with the six major powers will have been wasted,” said the rare statement issued by the Chinese delegation after Foreign Minister Wang Yi left Lausanne.

Wang said there was “significant progress in core issues” and the positions of all parties have become closer.

The U.S. administration of President Barack Obama had committed to meeting an end-March deadline for the outline political accord.

Negotiators have a tentative agreement on the rough outline of a possible public statement on the progress they have made so far that would also highlight areas of disagreement, diplomats close to the talks said. But they have not agreed on all the key details central to a political framework that would form the basis of a future nuclear agreement, the diplomats said.

Some parts of any understanding reached by the parties will likely remain confidential.

Failure to agree a detailed preliminary accord would add to skepticism in the Republican-controlled U.S. Congress over an emerging deal. Congress has warned it will consider imposing new sanctions on Iran if there is no agreement this week, giving an added sense of urgency to the talks. A Democrat, Obama has threatened to veto any such sanctions moves.

Officials cautioned that any accord would be fragile and incomplete, but the U.S. State Department gave the go-ahead for talks to go past a self-imposed Tuesday midnight deadline.

A source in the German delegation said that nothing was agreed yet “but if there is good will on all sides, an agreement is possible.”

Lavrov was quoted by TASS as saying the possible agreement included the International Atomic Energy Agency’s monitoring of Iran’s nuclear program as well as steps to lift sanctions. He added experts would work out technical details by end-June.

“One can say with enough confidence that (foreign) ministers have reached a general agreement on all key aspects of a final settlement to this issue,” Lavrov said. “It will be put down in writing over the next few hours, maybe during the day.”

The State Department said earlier that while enough progress had been made to extend the talks into Wednesday, “there are several difficult issues still remaining.”

A senior Iranian negotiator said Tehran was willing to negotiate until the deadlock was resolved. “Iran does not want a nuclear deal just for the sake of having a deal, and a final deal should guarantee the Iranian nation’s nuclear rights,” the negotiator, Hamid Baidinejad, told reporters.

White House spokesman Josh Earnest said in Washington on Tuesday that U.S. negotiators would not wait until June 30 to walk away from the talks if they could not reach a preliminary political agreement.

Speaking in Berlin with German Chancellor Angela Merkel, French President Francois Hollande said it would be better to have no deal than a bad deal.

An agreement would almost certainly lift sanctions only in stages, deferring even a partial return of Iranian crude exports until at least 2016. Sanctions have halved Iran’s oil exports to just over 1 million barrels per day since 2012 when oil and financial sanctions hit Iran. Brent crude edged lower towards $55 a barrel on Wednesday.