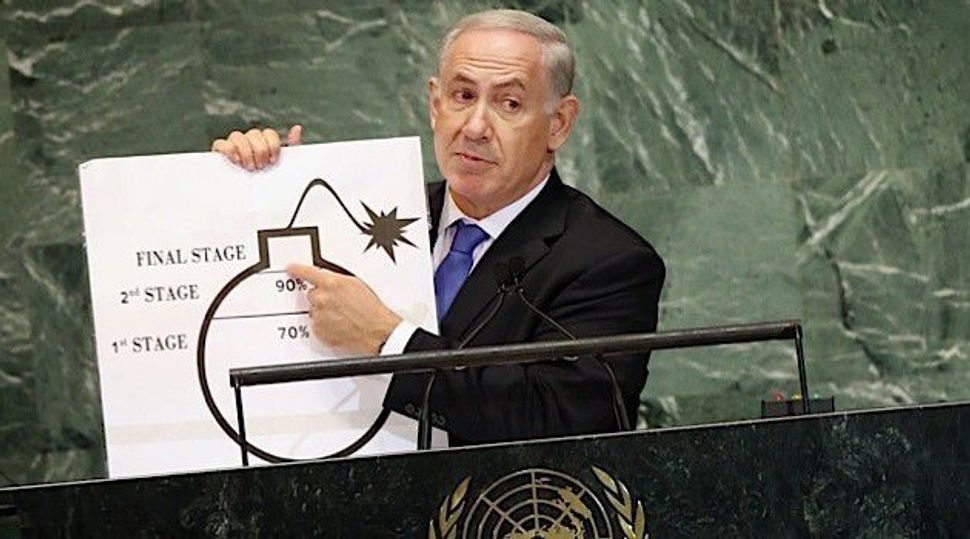 Benjamin Netanyahu warns the world about the danger posed by Iran’s nuclear program at the U.N. Image by getty images

Israeli Prime Minister Benjamin Netanyahu said on Wednesday it was not too late for world powers locked in nuclear negotiations with Iran to demand a “better deal.”

He made the comments before meeting in Jerusalem with the speaker of the U.S. House of Representatives, John Boehner, a leading Republican and strong critic of the White House’s policy on Iran.

“Now is the time for the international community to insist on a better deal,” Netanyahu said in a televised statement delivered in English.

Netanyahu said on Tuesday that a framework agreement sought by international negotiators to rein in Iran’s nuclear program would leave it with the capability to develop atomic weapons within a year.

Six world powers and Iran went beyond a midnight deadline and were continuing to negotiate in the Swiss city of Lausanne on Wednesday, having failed to agree on crucial details such as the lifting of U.N. sanctions.

Israel, which is believed to have the Middle East’s only nuclear arsenal, is not a party to the negotiations.

Iran was expected to be high on the agenda of Netanyahu’s talks with Boehner, who is visiting the region with a Republican delegation.

Avoiding stepping deeper into controversy with the White House over the issue, neither Boehner nor Netanyahu mentioned the nuclear talks in comments to reporters at the Israeli leader’s office.

Boehner’s invitation to Netanyahu to address the U.S. Congress last month on the Iranian issue drew accusations that both men were pursuing partisan politics at the expense of traditionally wide support for Israel on Capitol Hill.

“The bonds between the United States and Israel are as strong as ever,” Boehner said. “Our two countries cooperate on many different levels and while we may have political disagreements from time to time, the bonds between our two nations are strong and they’re going to continue to be strong.”

Congress has cautioned it would consider imposing new sanctions on Iran if there was no agreement in Lausanne this week. President Barack Obama has threatened to veto any such sanctions moves.

Senate Majority Leader Mitch McConnell has said that if a framework deal is reached, lawmakers would consider a bill that would require Obama to submit a final accord for Congress’ approval.