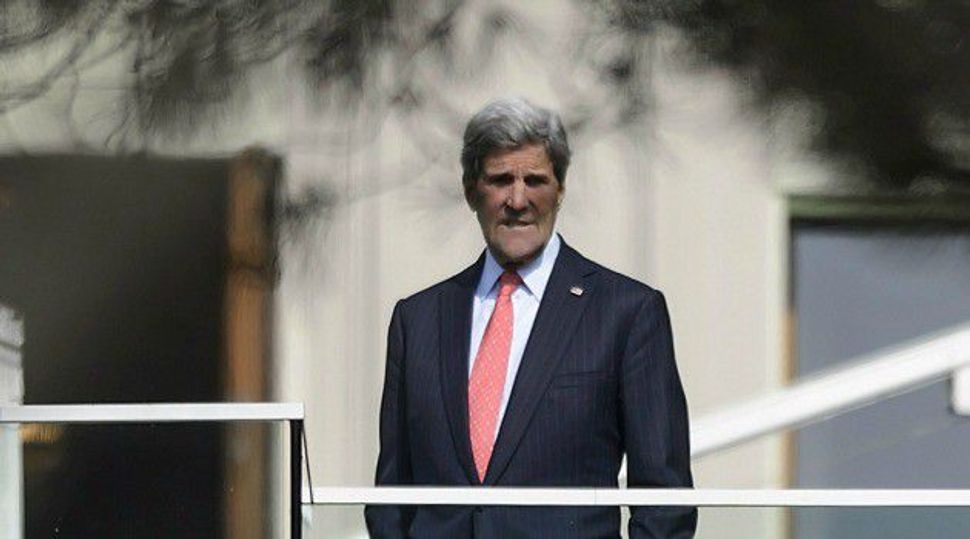 Major powers and Iran negotiated into the early hours of Thursday on Tehran’s nuclear program two days past their deadline, with diplomats saying prospects for a preliminary agreement were finely balanced between success and collapse.

The negotiations, aimed at blocking Iran’s capacity to build a nuclear bomb in exchange for lifting sanctions, have become bogged down over crucial details of the accord, even as the broad outlines of an agreement have been reached.

Negotiators talked until 6 a.m. (0400 GMT) on Thursday in the Swiss city of Lausanne, breaking off for three hours to rest. There were differing accounts of the extent of progress, with Iran’s Foreign Minister Mohamad Javad Zarif calling it ‘significant’ but a Western official describing it as ‘limited’.

Ministers and experts shuffled from meeting to meeting overnight as talks entered their eighth day.

Kerry and German Foreign Minister Frank-Walter Steinmeier said they would stay at least until Thursday in an effort to seal the “political” agreement, a milestone towards a final pact due by the end of June. A German delegation source said Steinmeier would delay a trip to Estonia, Latvia and Lithuania.

Six world powers – the United States, Britain, France, Germany, Russia and China – aim to stop Iran from gaining the capacity to develop a nuclear bomb. Tehran wants to lift international sanctions that have crippled its economy, while preserving what it views as its right to nuclear technology for peaceful purposes.

The powers and Iran said they had moved closer, but both sides accused the other of refusing to offer proposals that would break the deadlock.

The talks – the culmination of a 12-year process – have become hung up on the issues of Iran’s nuclear centrifuge research, details on the lifting of U.N. sanctions and how they would be re-imposed if Iran breached the agreement.

All sides are under pressure not to go home empty handed, but Washington reiterated on Wednesday it was willing to walk away if the sides couldn’t agree on a preliminary framework. White House spokesman Josh Earnest told reporters in Washington: “the time has come for Iran to make some decisions.”

There were also signs that President Barack Obama, whose administration was behind the end-March interim deadline that was criticized by the French and others as an artificial one, was coming under renewed pressure to walk away from the negotiations.

Republican senators John McCain and Lindsey Graham predicted the talks will not end well. “Any hope that a nuclear deal will lead Iran to abandon its decades-old pursuit of regional dominance through violence and terror is simply delusional,” they said in a joint statement.

The talks represent the biggest chance of rapprochement between Iran and the United States since the Iranian revolution in 1979, but face skepticism from conservatives in both nations’ capitals. Washington’s allies in the region, especially Israel and Saudi Arabia, are also deeply wary of any deal.

Even if there is a preliminary deal, it will be fragile and incomplete and there is no guarantee of a final deal in the coming months.

But Iran has repeatedly expressed optimism that an initial agreement was within reach, as has Russia, which with China is closest to Iran among the powers.

A key goal of the talks for Washington is to impose conditions on Iran that would increase the “breakout time” Tehran would need to develop a nuclear weapon if it should decide to pursue one.

An agreement would almost certainly lift sanctions only in stages, deferring even a partial return of Iranian crude oil exports until at least 2016. Sanctions have halved Iran’s oil exports to just over 1 million barrels per day since 2012 when oil and financial sanctions hit Iran.

Oil futures fell on Thursday, retreating from big gains in the previous session, on the prospect of a deal and a possible increase in Iran’s crude exports.