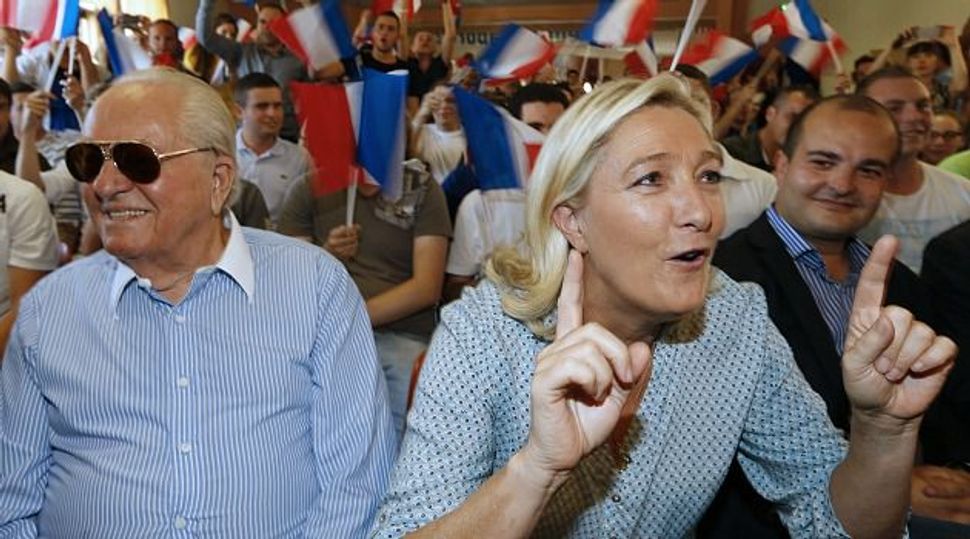 (Reuters) — Tensions between French National Front leader Marine Le Pen and her father Jean-Marie worsened on Thursday as the 86-year-old founder of the far-right party defended having described Nazi gas chambers as a “detail of history.”

Since taking over from her father in 2011, Marine Le Pen has tried to rid the anti-immigrant party of its anti-Semitic image and widen its voter appeal as she readies a bid for the French presidency in 2017.

In a television interview, Jean-Marie Le Pen defended a 1996 comment that gas chambers used to kill Jews in the Holocaust were “merely a detail in the history of World War Two,” a remark for which he was convicted of inciting racial hatred and fined.

“I deeply disagree with him. I take note of what he said but I believe that those coming over to vote for us understand what is going on … He is being deliberately provocative,” she told the website of Le Figaro daily.

It is not the first time the two have clashed. Marine Le Pen, a combative trained lawyer, distanced herself from her father last June after a quip about a French Jewish singer that included an implied reference to concentration camp ovens.

Under Marine Le Pen’s leadership, the party has deepened its roots across France, winning outright control of some town halls and getting its officials elected onto the councils of “departements,” broadly the equivalent of counties.

Polls suggest she could make it into the second-round run-off of a presidential election but is unlikely to win.

While other FN officials have been stripped of their party membership for racism, there has been no move to bar Jean-Marie Le Pen from a party of which he still holds the title of honorary president. He is popular with many FN members and will stand as a candidate in December’s regional elections.

The FN founder rejected all accusations of anti-Semitism and defended the gas chamber comment as a self-evidence.

Asked about the current state of the FN, he called it a party for patriots including “fervent Petainists,” a reference to Philippe Petain, the general who led the French war-time government that cooperated with Nazi Germany’s racial policies.