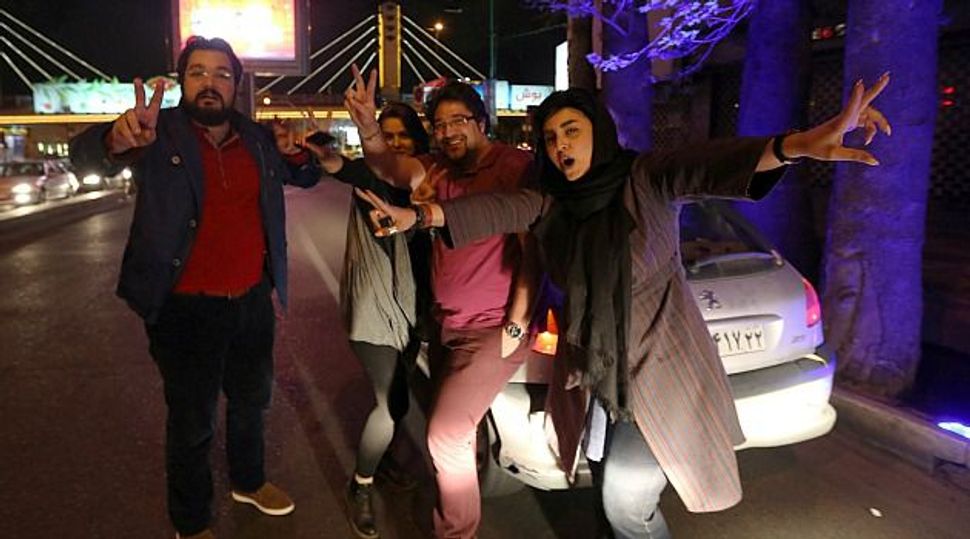 Celebrations broke out in Tehran on Thursday night as a landmark framework agreement for a nuclear deal between Iran and world powers was announced.

Videos posted on social media showed cars driving through the streets of Tehran with honking horns and passengers clapping.

Twitter posts described people dancing in the streets of north Tehran and passing out sweets. Some posted pictures of a small gathering in front of the Ministry of Foreign Affairs.

Friend of mine in #Iran pinching #Obama’s cheek out of sheer joy #IranTalks pic.twitter.com/M68J6yKgQt

In one video posted on Facebook, a group of women can be heard clapping and chanting “Thank you, Rouhani.” in praise of President Hassan Rouhani.

The framework agreement is likely to boost Rouhani’s popularity among the millions of young Iranians who voted for him in 2013.

So far, there has been no overt criticism of the framework agreement by Rouhani’s hardline critics.

Appearing on state TV shortly after it was announced, hardline parliamentarian Alaeddin Borujerdi aimed his barbs at U.S. President Barack Obama and his characterization of Iran’s role in the region rather than the agreement.

The framework agreement was reached after more than a week of intense diplomacy between an Iranian team of negotiators led by Foreign Minister Mohammad Javad Zarif and negotiating teams from the United States, Britain, Russia, France, China and Germany.

Iran has long maintained that its nuclear program is for peaceful purposes and the framework agreement is intended to introduce curbs and inspections on the program.

If a final settlement is reached, it would roll back harsh sanctions that have hammered Iran’s economy and made the lives of ordinary Iranians more difficult.