Is Iran Deal ‘Historic’ Global Breakthrough — or Calamity for Isael? 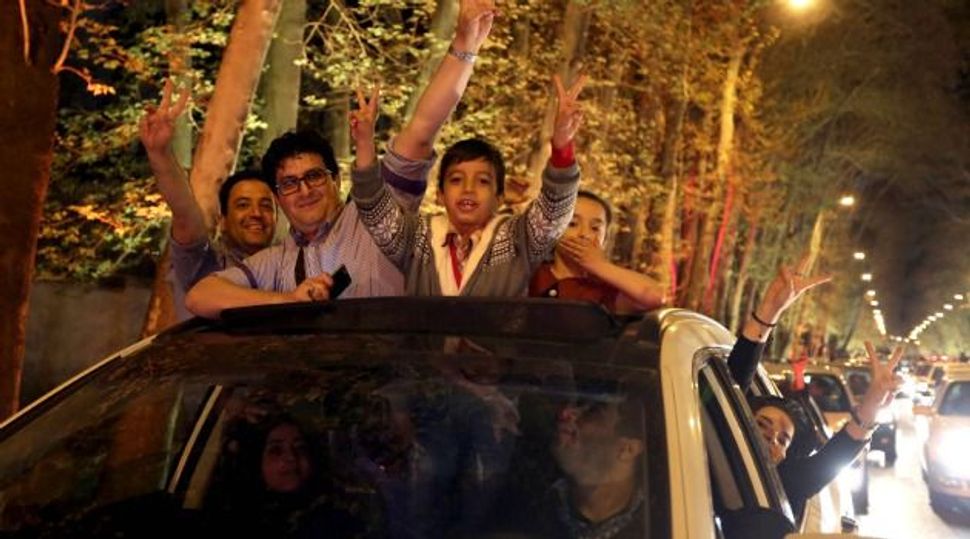 (Reuters) — Iranians celebrated in the streets after negotiators reached a framework for a nuclear deal that could bring their country in from the cold, hailed by U.S. President Barack Obama as an “historic understanding” with an old adversary.

The tentative agreement, struck on Thursday after eight days of talks in Switzerland, clears the way for negotiations on a settlement aimed at allaying Western fears that Iran was seeking to build an atomic bomb and in return lift economic sanctions on the Islamic Republic.

It marks the most significant step towards rapprochement between Iran and the United States since they became enemies with the 1979 Iranian revolution. But the deal still requires experts to work out difficult details over three months.

Obama and Iranian President Hasan Rouhani, who both took risks to open the dialog, will each have to sell the deal to skeptical conservatives at home.

With many details still up in the air, France cautioned on Friday against overoptimism. Israeli Prime Minister Benjamin Netanyahu, who has the ear of U.S. opposition Republicans, fumed against an arrangement he said could lead to nuclear proliferation and war in the Middle East.

The framework is contingent on settling the 12-year dispute by June 30. All sanctions on Iran remain in place until a final settlement.

Celebrations erupted in the Iranian capital after the deal was reached. Videos and pictures posted on social media showed cars in Tehran honking horns as passengers clapped. In one video posted on Facebook, a group of women can be heard clapping and chanting “Thank you, Rouhani.”

Among the six powers, France has taken a consistently tough line with Tehran. Fabius said Iran’s economy stood to gain $150 billion in relief from the sanctions.

“You will have seen that there was a lot of positive reaction in the streets in Iran, and I think it’s real, not fabricated. The Iranians, the people, the youth are expecting something and that should be noted,” he said.

Obama described the agreement as a “historic understanding with Iran.” He compared it to nuclear arms control deals struck by his predecessors with the Soviet Union that “made our world safer” during the Cold War. He also cautioned, however, that “success is not guaranteed.”

Netanyahu was to convene his security cabinet on Friday after telling Obama in a phone call that he “vehemently opposed” the agreement. In a statement released after the conversation, Netanyahu said a deal based on the framework announced in Lausanne “would threaten the survival of Israel.”

“This deal would legitimize Iran’s nuclear program, bolster Iran’s economy and increase Iran’s aggression and terror throughout the Middle East and beyond,” he said. “It would increase the risks of nuclear proliferation in the region and the risks of a horrific war.”

Israel is believed to be the only Middle Eastern country that has nuclear weapons.

Many details still need to be worked out. Diplomats close to the negotiations said the deal was fragile and the understandings reached could still collapse between now and June 30. Experts believe it will be much harder to reach a final deal than it was to agree the framework accord.

The deal is also opposed by Sunni Arab states which consider Iran, the leading Shi’ite Muslim country, to be a threat.

Under the outline deal, Iran would shut more than two-thirds of its installed centrifuges capable of producing uranium that could be used to build a bomb, dismantle a reactor that could produce plutonium and accept intrusive verification.

Russian Foreign Minister Sergei Lavrov said on Friday there was a “very good” chance of a final settlement.

The framework includes limits on Iran’s enrichment of uranium for 10 years.

Iran agreed to reduce the number of installed uranium enrichment centrifuges to 6,104 from 19,000, and will operate only 5,060 for 10 years, according to a U.S. fact sheet.

One of the most sensitive issues during the negotiations, Iran’s research and development work, will also be limited.

“Iran has agreed to not conduct research and development associated with uranium enrichment at Fordow for 15 years,” the U.S. fact sheet said. It also noted Iran will remove the 1,000 more advanced second-generation centrifuges currently installed at Natanz and place them in International Atomic Energy Agency-monitored storage for 10 years.

High enriched uranium can be used to make a weapon, while low enriched uranium is used in power plants. Iran has insisted it wants it only for a peaceful nuclear energy program and denies it aimed to build an atomic bomb.

Iran’s “breakout” timeline – the time that it would take for it acquire enough fissile material for one weapon – would be extended to at least one year, for a duration of at least 10 years, under this framework. It is currently assessed to be two to three months, the U.S. fact sheet said.

Iran would gradually receive relief from U.S. and European Union economic sanctions if it complies with the terms of a final deal. Some U.N. Security Council sanctions would be gradually lifted, though others would remain in place.

“We’re still some time away from reaching where we want to be,” said Iran’s Foreign Minister Mohammad Javad Zarif.

Failure to comply with terms of the deal will cause the U.S. and EU sanctions to “snap back into place,” the U.S. fact sheet said. It was less specific on U.N. sanctions, one of the main sticking points in the negotiations, saying only that they could be reimposed in the event of Iranian non-compliance.

Is Iran Deal ‘Historic’ Global Breakthrough — or Calamity for Isael?