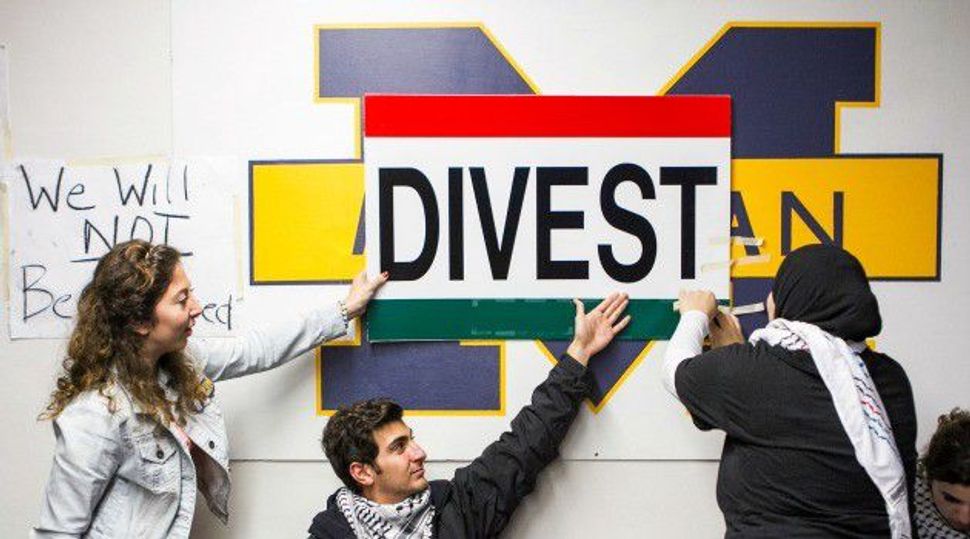 A Campus Divided: Students at the University of Michigan called on their school to divest from companies that they say contribute to human rights violations against the Palestinians. Image by ADAM GLANZMAN/MICHIGAN DAILY

The measure was voted down Tuesday, with 25 opposed, 15 in favor and one abstention, the Michigan Daily student newspaper reported. The resolution called for the creation of an ad hoc committee to investigate the university’s investments in four companies accused of violating Palestinian human rights in Israel and the West Bank with their products. Boeing, Caterpillar, G4S and United Technologies were the named companies.

Hundreds of students and others associated with the university attended the meeting, which lasted four hours. Palestinian-American journalist Ali Abunimah, who writes the Electronic Intifada blog, spoke in favor of the resolution.

The resolution was sponsored by Students Allied for Freedom and Equality, or SAFE, the university’s chapter of Students for Justice in Palestine, which promotes the Boycott, Divestment and Sanctions, or BDS, movement.

A similar resolution was voted down last year by the Michigan student government.