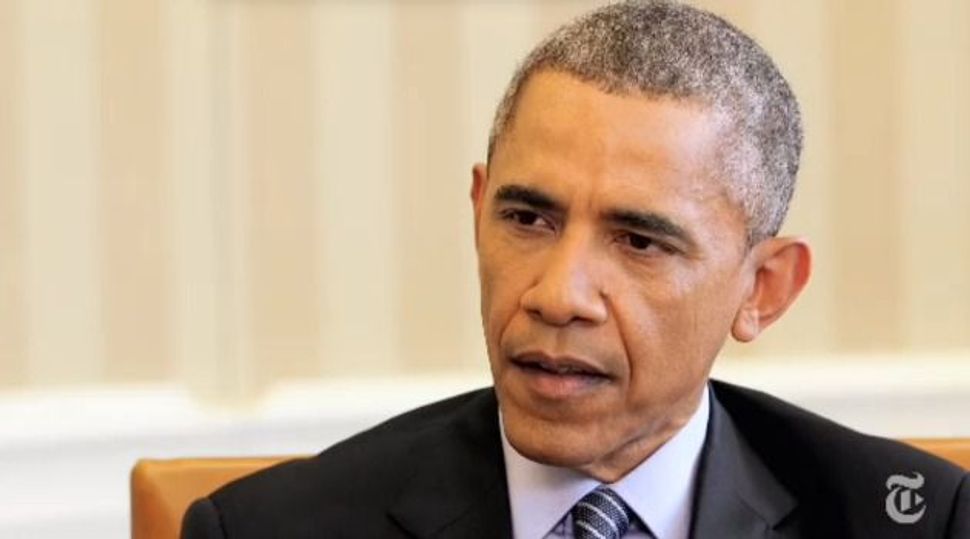 President Obama promised to defend Israel in making his most comprehensive case yet for a diplomatic resolution of the standoff over Iran’s nuclear program.

In a lengthy interview Saturday with Thomas Friedman of the New York Times, Obama made his pitch for the framework accord reached Thursday in Switzerland to limit Iran’s nuclear activities in exchange for a gradual relaxing of sanctions.

Though he acknowledged the legitimacy of Israel’s concerns about Iran, noting its leaders’ denial of the Holocaust and repeated threats to eliminate the Jewish state, Obama reiterated his view that a negotiated agreement is the “best bet” to prevent Iran from acquiring a nuclear weapon.

“There is no formula, there is no option, to prevent Iran from getting a nuclear weapon that will be more effective than the diplomatic initiative and framework that we put forward — and that’s demonstrable,” Obama said.

Obama emphasized that he understood the fears of Israeli Prime Minister Benjamin Netanyahu, who in an appearance on CNN Sunday morning said the deal offers Iran a “free path to the bomb.” The president promised to maintain Israel’s military edge and to protect it from aggression, saying the deal is “sending a very clear message to the Iranians and to the entire region that if anybody messes with Israel, America will be there.”

Obama called the opportunity to reach an agreement with Iran a “once-in-a-lifetime opportunity.” Comparing his engagement with Iran to his diplomatic opening with Cuba, Obama asserted that the United States could pursue detente with Tehran without risking its core strategic interests. And though he acknowledged that Israel is more vulnerable to Iran than the United States, Obama said American security guarantees should be “sufficient” to deter an attack.

“But what I would say to [Israelis] is that not only am I absolutely committed to making sure that they maintain their qualitative military edge, and that they can deter any potential future attacks, but what I’m willing to do is to make the kinds of commitments that would give everybody in the neighborhood, including Iran, a clarity that if Israel were to be attacked by any state, that we would stand by them,” Obama said. “And that, I think, should be … sufficient to take advantage of this once-in-a-lifetime opportunity to see whether or not we can at least take the nuclear issue off the table.”